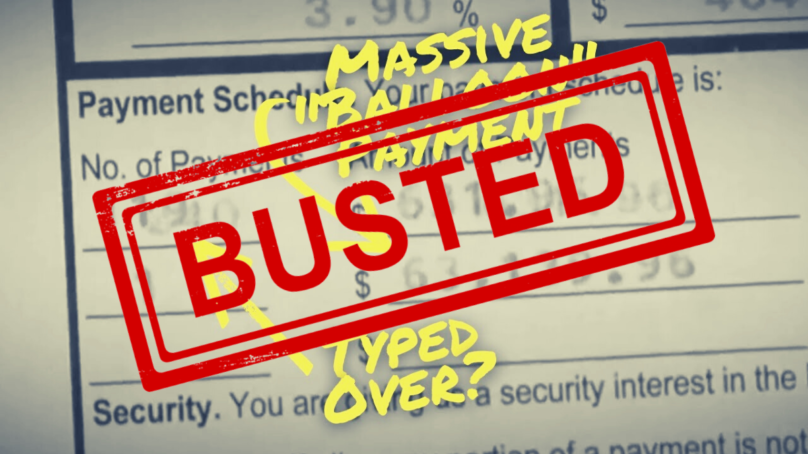 We begin this week’s news round-up with a follow-up to one of the bigger stories of the year, the General RV ballon payment scandal.

Six months ago, numerous RV owners came forward to a Utah Fox affiliate, claiming unexpected balloon payments in their loan paperwork. The RVs in question were purchased between 2013 and 2015 at the Draper, Utah General RV location. The loans were between $100,000 and $200,000. All list a “total amount paid” or “the amount you will have paid when you have made all scheduled payments.” A number equal to 240 monthly payments (20 years worth) times the monthly payment amount. And all had the number of payments listed as 240, with 119 typed over it, or a “smudge” as Fox referred to it, and a single balloon payment between $60,000 and $100,000, due at the 10-year mark to finish out the loan.

All four sets of paperwork were carbon copies, and at least two of them were unsigned by General RV. Bank versions of the paperwork show no typed over so-called “smudge,” just the clear number 119, equal to 10 years worth of payments, including the balloon payment as the 120th.

General RV was pretty hands-off in their response, saying “We have completed a thorough investigation of the allegations and confirmed that no one at General RV did anything wrong.”

But as of this week, that’s not what the state of Utah believes happened. Investigators with the Utah State Tax Commission say they believe four General RV employees fraudulently manipulated dozens of customer contracts, but neither the company nor the employees are being charged with a crime. According to Utah state law, charges of communications fraud must be filed within four years. This puts all the loans outside the statute of limitation.

The investigation was handled by The Motor Vehicle Enforcement Division who concluded that, while no problematic transactions occurred after 2017, General RV employees intentionally smudged the numbers to add balloon payments and cut the length of the loans in half. According to the case file, some of the employees blamed “outdated” computer software, for why they taped a piece of paper over the documents as they printed, altering the customers’ carbon copies. At least one employee told investigators that “thousands of deals were done this way,” but insisted the goal was not to deceive the customer.

According to the state, it was never able to find a reasonable explanation for so many instances of faulty math on the paperwork. The names of the four General RV employees are not being publicly released. Currently, none of them still work for General RV, although some do still work in the financing industry. Make sure you check your loan paperwork, no matter what state you are in.

Motorhome Values on the Rise

Last month we shared the news from Black Book that the used RV market may have begun to level off in August. Auction values for motorhomes had taken a bit of a dive, while towables had remained fairly steady. But now September’s numbers are out, which reversed course. Motorhome values went back up to nearly their all-time peak, while towables dropped a considerable amount, yet still selling for about $3400 more than they were a year ago, when we were already deep into this COVID RV boom. 3 years ago, the average towable RV was auctioned for about $14,000. Today’s average is $22,000. The average motorhome was selling for $47,000 at auction. Today, it’s going for $75,000. The only conclusions to be made are that demand is still very high, and RV industry profits are probably reflecting that.

There’s a lot of news on that front this week, too. Earnings reports came in for some of the biggest players in the industry, bringing in some record-breaking numbers for Lippert, Camping World, Jellystone, LazyDays, and more. Lippert and Camping World reported increases in the billions, and all show a significant jump in revenue over 2020. LazyDays pushed close to 50% over this time last year. At Jellystone campgrounds, reservations continue to climb and sales are up 47%. 2021’s summer camping season was a very busy time for Yogi Bear and Boo-Boo and 2022 is looking to be much of the same if this new travel trend report from Outdoorsy holds true.

In its annual end of year Travel Trends Report, Outdoorsy identified 13 travel trends we can expect to see in the coming year, including a continued interest in RVing or self-contained travel spurred by lingering safety concerns and the increased ability to work from the road. They also say that first-time campers will continue to dominate the market.

In a statement Co-founder and CEO, Jeff Cavin says, “What we’re hearing from travelers, and what was further confirmed by our internal data, is something we’ve known all along. The pullback of leisure travel in 2020 and 2021 has created a slingshot effect, a revenge travel effect if you will, that we’ll see spring to life in 2022. If anything has changed in the psychology of leisure travel since the start of the pandemic, it’s a traveler’s optimistic prioritization of factors like cleanliness, safety, and convenience — preferences that will continue to create first-time RVers and sustain demand for modes of self-contained travel.”

In the ultimate teaser TikTok, Forest River released a short video last week of a new yet-to-be-named fifth wheel that is absolutely stunning. It has a crazy giant toy-hauler-like FRONT underbelly storage that I’m told is part of  a patented new chassis design. There’s a gorgeous, minimal rear living space and kitchen with a dishwasher, a front entry with a coat closet and a place for your vacuum, one of the most beautiful RV bathrooms I’ve ever seen, a stackable washer and dryer, and a master bedroom to die for. Word is there will be a travel trailer version of this unit as well. Any guesses on what brand it might be?

Finally, just a reminder that the RV Miles Podcast now has its own YouTube channel. Come join Abby and me every week for a talk show-style discussion on travel destinations, news, listener questions, plus interviews featuring people from all around the RV world. We look forward to seeing you over there as well.

What do you think travel in 2022 is going to look like? Let us know your thoughts on next year, or any of the topics covered this week in the comments below.