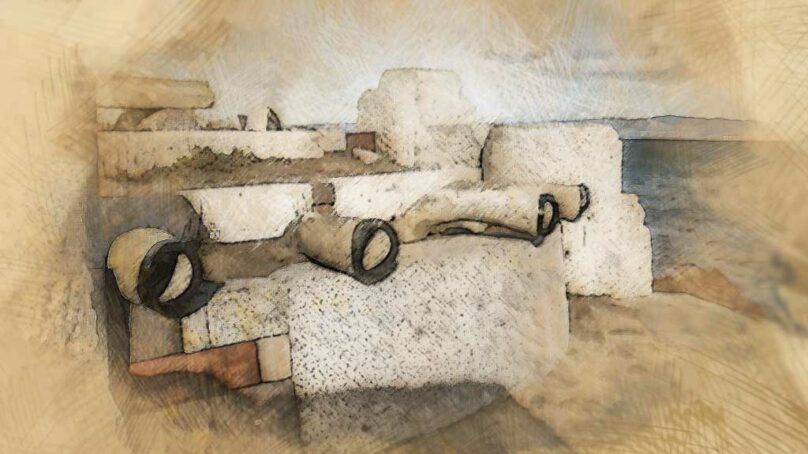 This episode of the See America Podcast was written and narrated by Abigail Trabue and hosted by Jason Epperson. Our thanks to the Exploratorium for the assistance with this article.

The See America Podcast is sponsored by Roadtrippers. America’s #1 trip planning app. Enjoy 20% off your first year of Roadtrippers PLUS with the code RVMILES2X.

Along the eastern edge of San Francisco’s Golden Gate National Recreation Area sits a tiny spit of land, a jetty actually. Constructed from an assortment of granite and marble pieces taken from the demolition of the Laurel Hill Cemetery. The jetty offers panoramic views of the city, including the majestic Golden Gate Bridge.

The view of the bay alone is worthy of a road trip to San Francisco, but that’s not why we’ve come to this small piece of land. We’ve come to hear the music. The music of The Wave Organ. One of the many pieces created on-site at San Francisco’s Exploratorium.

History of The Wave Organ:

Peter Richards — an artist-in-residence at the science, technology, and arts-focused Exploratorium in San Francisco — had grown fascinated by artist Bill Fontana’s recordings of sounds emanating from the vent pipe of a floating concrete dock in Sydney, Australia. He thought he could build upon this phenomena — an almost electronic sound — by harnessing it into a musical instrument. In 1980, he was awarded a planning grant from the National Endowment for the Arts that would enable him to conduct an investigation into the physicality of what he would come to call the Wave Organ.

Working alongside sculptor and master stonemason George Gonzales, Richards built a prototype on the jetty overlooking the bay and presented it as part of the New Music ’81 Festival. Though rudimentary in nature, the spirit of the work was there. Richard’s Wave Organ was met with enthusiasm and support, and the buzz stirred up so much excitement that the museum immediately began to install a permanent exhibit that would replace the prototype.

Though enthusiasm was strong, construction of the piece didn’t begin until September 1985. The Wave Organ was officially complete eight months later in May 1986.

The instrument itself is comprised of 25 organ pipes made of PVC and concrete that extend down into the water at various levels. The Wave Organ’s sound is created as waves crash against the ends of the pipes and move in and out. As the waves roll in, the pipes fill with a liquid music. These low, gurgling notes ebb and flow with the movement of the ocean and the changing of the tides.

The sound is subtle, requiring visitors to become sensitized to its music, and at the same time to the music of the environment. The Wave Organ’s song is always changing, much like the tide itself and the city it sings to.

Peter Richards in a video for the Exploratorium titled “My New Wilderness.”

Visiting The Wave Organ and Exploratorium:

As road schoolers and full-time travelers, Abigail and I spend a lot of time in museums with our kids. It’s one of the first things we do whenever we find ourselves in an urban environment. Some of our favorite museums have been ones that are continually growing and reimagining what a museum can be and should do. The Exploratorium is one of those museums.

The dream of Frank Oppenheimer, the renowned physicist and brother of J. Robert Oppenheimer, known to many as the father of the atomic bomb, the Exploratorium has been making their own hands-on exhibits since they opened in 1969.

Located at Pier 15, and built inside the Palace of Fine Arts, which was once part of the 1915 Panama Pacific International Exposition, the Exploratorium was revolutionary for its time. Instead of stuffy halls filled with items you could only look at, you went on an explore-for-yourself adventure filled with hands-on exhibits.

The Exploratorium continued the revolution when in 1992 it launched an Exploratorium website making it one of the first 600 websites online.

Today, the Exploratorium boasts over 650 hands-on exhibits, including the Wave Organ.

You can reach the museum via car, bike, or San Francisco’s public transit. There is an admission charge to tour the inside exhibits; however, there is no charge to visit The Wave Organ. A popular spot in the morning with fisherman, the park and trail is wheelchair accessible, and you can reach the trailhead at the Marina Green Park.

The Wave Organ sounds best at high tide, and the exhibit page has a link available to check the tides.

If you’re a National Park lover, check out the America’s National Parks Podcast, or come listen to Abigail and me talk about our life on the road with our three boys on the RV Miles Podcast. Paragraph

See America | The Hoover Dam and Its Mascot