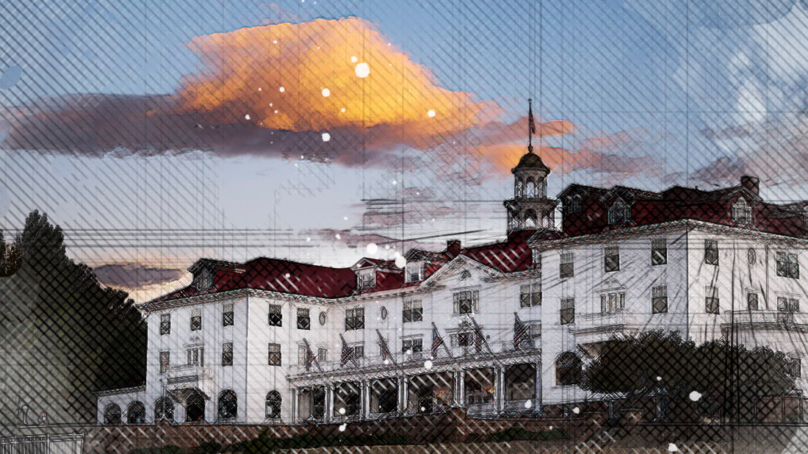 See America is sponsored by Roadtrippers. America’s #1 trip planning app. Enjoy 20% off your first year of Roadtrippers PLUS with the code RVMILES2X

Colorado’s Estes Valley was once a wild, lonely parkland known only to the nomadic tribes of Ute and Arapaho. When the Earl of Dunraven visited in 1872, he coveted this a “sportsman’s paradise” of rushing streams and peaceful meadows teeming with fish and game. He sought to keep the valley to himself as a private hunting preserve, but as more and more American settlers were drawn by its natural beauty, he realized that his dream could never be a reality.

Yankee inventor Freelan Oscar Stanley arrived in the valley, weak and underweight from the symptoms of consumption. To his amazement, just one season was enough to restore his health to better than before.

Overjoyed, he vowed to return each summer for the rest of his life. But he and his wife Flora were used to the sophistication of East Coast society, and the little community of Estes Park offered little to stimulate and challenge this multi-talented genius. Together, they resolved to build a beautiful grand hotel, one that many years later would play host to a young Stephen King, inspiring one of his most famous and chilling tales.

When the Stanley Hotel opened in 1909, the first guests who pulled up in stylish steam cars were astonished at what they saw. Here in this mountain wilderness, surrounded by the rustic haunts of the hunter and homesteader, was an edifice that withstood comparison to the posh hotels “back east.” Electric lights, telephones, en suite bathrooms, a staff of uniformed servants and a fleet of automobiles were at their disposal. Naturally, Stanley had also done much to develop the burgeoning town. By 1917, it was an official municipality with water-works, a power plant and civic organizations that were all, in some way, thanks to Stanley.

In 1907, construction began on the 48-room grand hotel Stanley, but the land wasn’t officially purchased until 1908 from the representatives of Lord Dunraven, who originally acquired it through the Homestead Act. Between 1872 and 1884, Dunraven had claimed 15,000 acres of the Estes Valley in an unsuccessful attempt to create a private hunting preserve, making him one of the largest foreign holders of American lands. Unpopular with the local ranchers and farmers, Dunraven left the area for the last time in 1884, relegating the ranch to the management of an overseer. Dunraven’s presence in Colorado had become well known. Stanley suggested “The Dunraven” as a name for his new hotel, but Dunraven’s ill reputation encouraged 180 people to sign a buckskin petition requesting that he name it after himself instead.

The floor plan of the main hotel was laid out to accommodate the various activities popular with the American upper class at the turn of the twentieth century and the spaces were to be decorated accordingly. The music room, with its picture windows and fine, classical plaster-work was designed for letter-writing during the day and chamber music at night. The smoking lounge and adjoining billiard room were adorned with dark stained-wood and a granite arch fireplace. Stanley himself did not smoke cigars or drink alcohol, but these were essential after-dinner activities for most men at the time. Billiards, however, was among Stanley’s most cherished pastimes.

The main hotel and concert hall were completed in 1909, featuring 48 guest rooms, each with its own telephone. Each pair of rooms shared a bathroom. With no central heating or ventilation system, the structure was designed to facilitate natural airflow. the Palladian window at the top of the grand stair could be opened to induce a cross-breeze through the lobby, French doors in all the public spaces open onto verandas, and two curving staircases connecting the guest corridors prevent stagnant air in the upper floors.

Although the hotel never operated as a sanitarium, it was designed to be an optimal environment for pulmonary health. When the construction plans were announced, the Fort Collins Weekly Courier reported, that it had “been a favorite place for doctors to send the more robust of their patients, who were in shape to be braced up by the keen air and the considerable altitude, but it has not always been possible to get suitable accommodations and surroundings for them.

To bring guests from the nearest train depot in the foothills town of Lyons, Colorado, Stanley’s car company produced a fleet of specially-designed steam-powered vehicles called Mountain Wagons which seated 9 to 12 passengers.

Stanley operated the hotel almost as a hobby, saying once that he spent more money than he made each summer. In 1926, he sold it. Until 1983, the resort was only open during the summer, shutting down for the winter every year. The presence of the hotel and Stanley’s own involvement greatly contributed to the growth of Estes Park and the creation of the Rocky Mountain National Park, established in 1915.

By the 1970s the hotel’s splendor had faded due to lack of care and investment. It might have eventually succumbed to the wrecking ball, if not for a fortuitous visit by author Stephen King.

In 1974, King and his wife Tabitha spent one night at the Stanley Hotel during their brief residency in Boulder, Colorado. Stephen and Tabitha found themselves checking in as most other guests were checking out. The hotel was about to shut down for the winter season.

The pair was served dinner in an empty dining room accompanied by canned orchestral music.” Except for our table, all the chairs were up on the tables,” King would later recount. “So the music is echoing down the hall, and, I mean, it was like God had put me there to hear that and see those things.

Tabitha went to bed and Stephen roamed the halls and went down to the hotel bar, where drinks were served by a bartender named Grady. As he returned to his room, numbered 217, his imagination was fired up by the hotel’s remote location, its grand size, and its eerie desolation. When he went into the bathroom and pulled back the pink curtain for the tub, which had claw feet, he thought, ‘What if somebody died here? At that moment, he knew he had a book.

In bed, he dreamed of his three-year-old son running through the corridors of the hotel, looking back over his shoulder, eyes wide, screaming. He was being chased by a fire-hose. He woke up with a jerk, sweating. “I got up, lit a cigarette,” he said… “sat in a chair looking out the window at the Rockies, and by the time the cigarette was done, I had the bones of The Shining firmly set in my mind.”

“The Shining” was published in 1977 and became the third great success of King’s career after Carrie and ‘Salem’s Lot. The setting is an isolated Colorado resort called the Overlook Hotel which closes for the winter.

Despite its connection with King’s novel, the Stanley Hotel has little to do with Stanley Kubrick’s 1980 film adaptation. The exteriors of Kubrick’s Overlook Hotel were shot at the Timberline Lodge near Mt. Hood in Oregon. The interior was inspired by the Ahwahnee Hotel in Yosemite National Park.

King was apparently displeased with Kubrick’s film, based mainly on Jack Nicholson’s portrayal of Jack Torrance. In 1996, Warner Brothers secured the television rights to The Shining and produced a miniseries (stylized as “Stephen King’s The Shining”) with a script by Stephen King. The Stanley Hotel was chosen as the primary shooting location.

The fame from “The Shining” reinvigorated the Stanley Hotel, and Room 217 remains their most requested accommodation.

Today, the Stanley Hotel offers modern accommodations, but still allows you to feel like you’re stepping back in history. Whether you stay or just visit, you can join one of the daily tours that explore the grounds of this magnificent structure set against the grandest views.

Jason Epperson is the co-host of the See America Podcast and Co-Founder of the RV Miles Network, a network of resources for the U.S. based traveler. Jason, along with his partner Abigail Trabue, travel the country full-time with their three boys discovering great road trip destinations and exploring our National Parks.

Links to some of the resources we used in this episode.