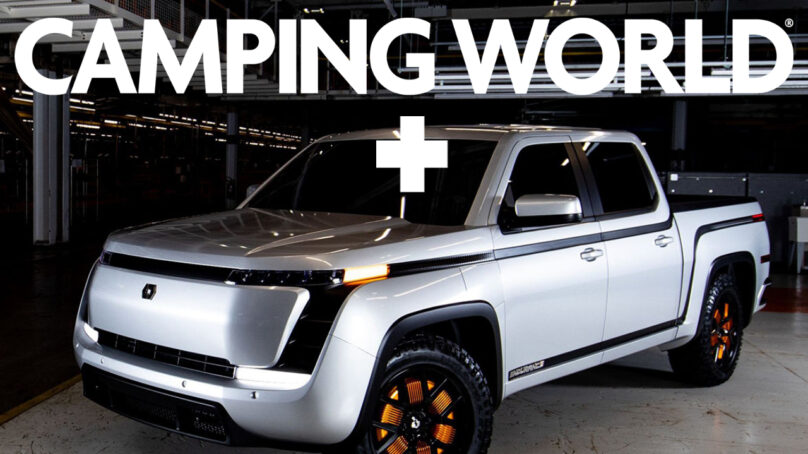 It may seem like an odd pairing, but the biggest problem the independent electric vehicle companies face is providing service and support without an already established nationwide dealership chain like the big automakers, who are hot on their heels with their own electric trucks.

Camping World has a reputation among many RV owners for less-than-stellar service — in fact, the entire RV industry is trying to solve a service crisis that has RV owners waiting months for repairs, no matter which dealer they use.

And with Camping World not really hurting for cash right now, you might be wondering what the upside is. It’s all about the future of electrified RVs, which is coming sooner than you think. Camping World service technicians will be trained in electric vehicle service, and be able to install and maintain lithium battery systems in the RVs they sell.

CEO Marcus Lemonis says that Camping World is working with manufacturing partners Thor Industries and Forest River to put Lordstown’s battery systems into even budget model towable trailers. That could be the catalyst to push the entire industry towards lithium power systems and solar.

But that’s not all, Camping World plans to work with Lordstown to develop a budget model electric motorhome, saying that a prototype should be available as soon as next summer.

Lordstown Motors is focused on being the first electric truck maker to get to market, focusing mostly on the commercial fleet market. The Endurance truck features 4 electric motors inside the vehicles individual wheels. Camping world will provide mechanical and collision service, along with a parts network utilizing its 4 distribution centers. Lordstown is also rolling out independently owned and operated service centers in high density areas.

The form factor of the Endurance will be adapted to what Lemonis called a “Class-E” motorhome over the coming months. In reality, the idea is a Class C concept, lengthening the Endurance chassis to fit an RV body on top.

“The future is now, and the realization of electrifying RVs and the outdoor community is within our grasp and will only grow from here,” said Marcus Lemonis, Chairman and CEO of Camping World. “Lordstown’s recognition of the need for a national support network for service and technical support along with a fluid customer experience reinforces our confidence in this relationship.”

“Lordstown’s partnership with Camping World will help us help ensure that our fleet customers have the highest possible up-time of their vehicles,” said Lordstown Motors CEO Steve Burns, “On top of that, working with Marcus and his team to bring EV solutions to the RV market is quite exciting, and I’m excited about the first-to-market opportunities this partnership affords us.”

The Endurance truck joins other independent electric vehicle manufacturers Tesla and Rivian in the rush to bring electric trucks to the market. It will be interesting to see whether consumers are more interested in something totally unique, or would rather have an electric Ford, Chevy, or Ram. The big automakers are also working hard on getting electric models to dealer lots, considering that last year, well over 70% of all vehicles sold were trucks.

Cross country trips in electric motorhomes or with electric trucks pulling trailers aren’t quite a reality yet, as range continues to provide a challenge. You can only go up to a couple hundred miles before recharge pulling a big load at the moment. But as electric charging becomes faster and more commonplace, we’re going to see it be adapted. Integrating RV house battery systems into that infrastructure is a smart move. We’ll see if it pans out.

We Tried the KFC Firelog so You Don’t Have To