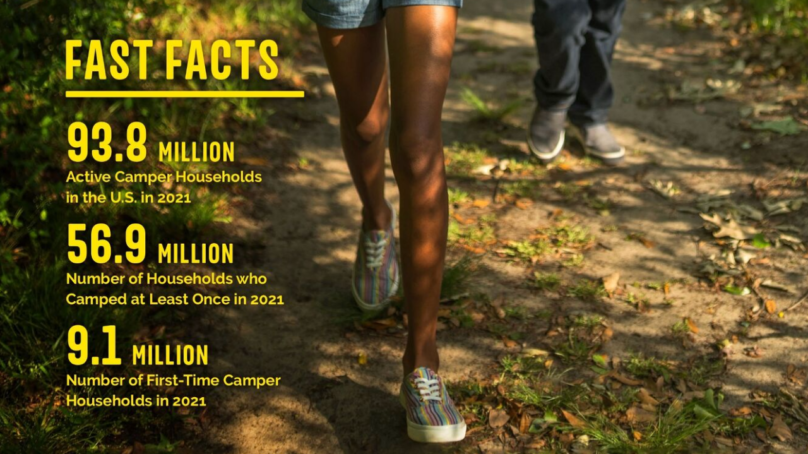 North America’s largest campground chain, Kampgrounds of America (KOA) has released its annual report on American camping, considered by many in the outdoor industry as the most anticipated study on the behaviors of RVers and campers. There were over 9.1 million first-time campers last year according to the study, one-third of whom said that COVID-19 was the impetus to try it out.

This growth has resulted in campers booking their campsites much earlier in the season, with about three-fourths (75%) having already secured some of their campsites for 2022 by early April.

Camping behavior is changing, too. 46% of campers worked remotely during at least some of their trips, up from 41% in 2020.

Tracking eight years of continued growth and interest in camping, the 2022 survey found that camping has become a mainstream, widely adopted leisure travel option. Not only did 40% of leisure trips result in camping, but 80% of all leisure travelers choose camping or glamping for at least some of their trips.

“Our research shows that camping is one of the primary ways households prefer to travel and spend their leisure time…75% of campers say it reduces stress and contributes to their emotional well-being,” said Whitney Scott, chief marketing officer of Kampgrounds of America. “Camping is driving leisure travel’s recovery, and its benefits will fuel future market share.”

Since KOA’s first North American Camping Report was published in 2015, the number of camping households in the U.S. and Canada has increased by 77%. Although camping grew steadily from 2014 to 2019, the industry witnessed a 31% increase in people camping at least once a year over five years and grew by 36% in just the past two years (from 2019 to 2021). In 2021, 57 million households reported that they went on at least one camping trip last year, an 18% increase compared to 2020 and the most significant year-over-year change since the report’s inception. Among all North Americans polled, nearly half (48%) participate in both camping and another form of leisure travel, while about 1-in-20 households camp exclusively as their only form of leisure travel.

Glamping and RVing also continue to grow in popularity. Nearly half of new campers in 2021 went glamping at least once, and almost 15 million households went RVing at least once to explore the outdoors. While in the past, most RVers rented or borrowed RVs for their vacations, 77% of RVers now own their rig. Similarly, interest in RV purchasing is high among non-RV owners, with 32% saying they want to purchase an RV in 2022.

Additional key findings from the 2022 North American Camping Report include:

The Rise of the Urban Camper

In 2021, camping saw the rise of the urban resident as one of the most avid camping segments in terms of both trips and the number of nights spent camping.

Music festivals continue to be one of the most popular reasons for the urban camper to get outside, with 44% camping for these types of events in 2021.

Looking ahead to 2022, 44% of this group plan to replace a traditional leisure trip with a camping trip, citing current economic conditions and avoiding crowds as critical drivers for their decision-making.

The pandemic has created permanent ripple effects in the way Americans work, and this shift also impacts the camping industry. 46% of campers work during at least some of their trips, up from 41% in 2020, including 57% of millennials.

Close to half of campers rate having Wi-Fi as important (48%), impacting their ability to camp so they can extend their trips and stay connected to work as needed.

RVing is at an all-time high, with 11 million RV owners camping last year and two million new RV renters in 2021.

There is a marked increase in peer-to-peer RV services, with seven-in-10 non-RVers saying they are likely to rent from a peer-to-peer service, including 79% of millennial respondents.

Diversity, Equity, and Inclusion in the Outdoors

New campers continue to be more diverse when compared to campers overall, with 54% of new campers self-identifying as non-white. About one out of every three camper households includes people who identify as Hispanic, Black, Asian, or other non-white ethnicities.

A quarter of Black campers plan to embark on their first solo camping trip in 2022.

The age demographic makeup of campers continues to trend younger, with millennials and Gen-Z making up 53% of all campers. Seven-in-10 new campers are 40 or younger.

In 2021, it is estimated that campers spent about $44 billion in local communities during their trips.
About seven million leisure traveler households will try camping in 2022.

It is predicted that overlanding will become a more popular camping vertical. Overlanding is a self-reliant form of travel with off-roading transport vehicles where the primary form of lodging is camping, and trips are usually for extended periods. In 2021, 27% of campers took an overlanding trip for the first time, and 46% of all campers want to try overlanding in 2022.

Glamping continues to grow, with 36% of campers going on a glamping trip for the first time in 2021. In 2022, 50% of campers are seeking a glamping experience.

Given camping’s increased popularity and early booking trends, it will be beneficial for interested campers to plan earlier than ever before to secure their desired dates and locations. In fact, by April 2022, about three-fourths of campers had already booked at least some of their campsites for 2022.

The Future of Camping

Celebrating 60 years in 2022, the demand for KOA’s camping inventory continues to increase. In 2021, KOA confirmed 26 new franchise locations. KOA’s future openings include new campgrounds in Virginia, California, Alabama, Nebraska, Oregon and Alberta as well as a new corporate headquarters in its hometown of Billings, Mont.

To view additional findings from the 2022 North American Camping Report, or view previous versions of the annual report, visit www.NorthAmericanCampingReport.com.