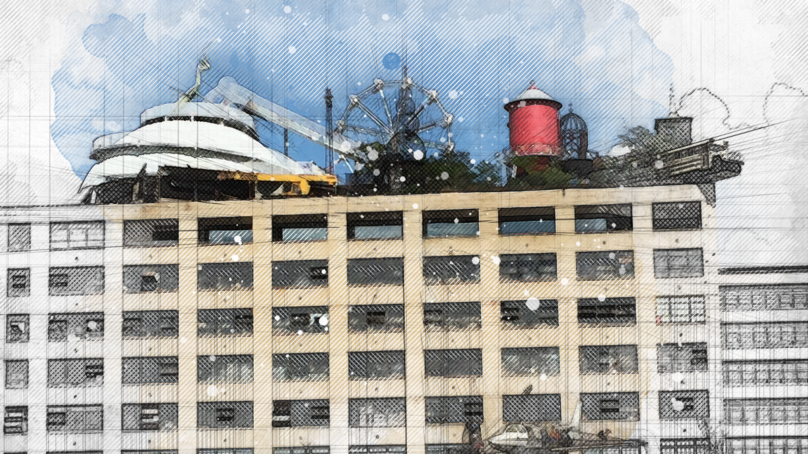 This episode of the See America Podcast was written and hosted by Jason Epperson with narration by Abigail Trabue.

In the heart of America sits one of the wildest museums in the world. In fact, I’m not even sure “museum” is the proper term for it. Housed in a 10-story former shoe factory, this sprawling 600,000 square-foot urban playground stirs the imaginations of children and adults alike. It’s eclectic and entertainingly unique – it’s the City Museum.

History of the Building:

St. Louis, Missouri. Gateway to the West. Home of the 1904 World’s Fair. The first American city to host the Olympics. Home to the first Kindergarten. The first interstate highway. The largest beer-producing plant in the nation (let’s not call it a brewery), the tallest human-built monument. It’s the home of some weird food traditions, like toasted ravioli, gooey butter cake, and provel cheese pizza, which is probably the only pizza I’ve ever tried that I didn’t like. 7-Up was invented here, and the ice cream cone.

Among all those firsts, St. Louis used to hold one title, long before nearly the entire clothing industry left America’s borders. Shoe manufacturer to the world. Forty-eight million pairs of shoes were shipped out of St. Louis in 1905.

Back in the 1820s, a dozen or so cordwainers, artisans who crafted boots and shoes by hand at their shops, peppered Main Street. As the city grew to become a major shipping hub along the Mississippi, more shoemakers and cobblers opened up, and by 1860, a shoe factory employing 300 people opened on the corner of Main and Vine.

With the railroads came cheap immigrant and child labor, and a heck of a lot more shoe manufacturers. Some were homegrown, while several others moved operations from places like Memphis and Boston.

By 1905, St. Louis was producing one-sixth of all the shoes made in the United States at more than 20 different companies located mostly within the Washington Avenue garment district. The weaker companies began to be bought out or merged. One such conglomerate was 1911’s International Shoe Company, which, by the time it bought out enough of its competitors, became the largest shoe manufacturer in the world.

The growth of the St. Louis shoe industry was aided by World Wars I and II when companies received contracts to make boots and shoes for the army and navy, but in the 1960s and 1970s, production decreased, and factories closed as Americans began to buy cheaper shoes made overseas. The International Shoe Company began to diversify, buying out retailers and manufacturers of other kinds of goods, primarily furniture. It changed its name to “Interco” and then Furniture Brands International, owning brands like Broyhill and Thomasville. In 2013, Furniture Brands filed for bankruptcy and announced plans to sell most of its divisions.

St. Louis is one of my favorite cities. With its host of family-friendly activities, it’s been a quick getaway destination for my family since I was a kid. It was also one of the first places I took my own family on vacation, lighting the road trip spark that continues today. In my Chicago theater producer days, I even took a touring production of a holiday show to St. Louis; I enjoy the city so much. It was actually during that visit that I discovered one of the wildest attractions in America, which resides in the 10-story former home of the International Shoe Company, right downtown in what’s now called the Washington Avenue Loft District.

It’s called the City Museum, and it’s full of wild and fancy exhibits, play structures, and curiosities, mostly made from reclaimed architecture and industrial materials.

It’s a maze of tunnels and slides and rebar towers that lead to exhibits like a life-size Bowhead Whale, a giant Slinky, which is an old refrigerating coil donated by Anheuser-Busch, the largest continuous mosaic in the US. There’s a 1924 Wurlitzer Pipe Organ, an indoor skate park and indoor circus, a collection of vintage video and pinball games. There’s the world’s largest pencil, at more than 76 feet in length and 21,500 pounds. It’s the equivalent of 1.9 million regular No. 2 pencils; it includes 4,000 pounds of graphite and a 250-pound rubber eraser. Most of the indoor museum resides on the 1st-3rd floors, but there’s a ten-story slide that utilizes the whole building, and a heck of a lot outdoors.

The roof has a small old-fashioned Ferris wheel, a pond, and a school bus extending beyond the edge of the building. Nearer to ground level (but not too near it), two aircraft fuselages are suspended high in the air. There’s a fire engine, a castle turret, and two ball pits filled with large, rubber dodge balls.

History of the City Museum:

Artist Bob Cassilly was born in Webster Groves, Missouri, to a homemaker and a building contractor. He began skipping school at age 14 to work as an apprentice for a local sculptor. He earned a bachelor’s degree in art from Fontbonne University in St. Louis, where he met and married his first wife, Cecelia Davidson. In May 1972, the couple honeymooned in Rome and were visiting St. Peter’s Basilica in Vatican City when one of the most significant destructive actions toward a famous piece of art ever was, by chance, taking place. Lazlo Toth, wielding a geologist’s hammer and shouting, “I am Jesus Christ — risen from the dead” struck Michelangelo’s Pietà statue 15 times, removing Mary’s arm at the elbow, knocking off a chunk of her nose, and chipping one of her eyelids.

Bob Cassilly was the first to act. He struck Toth several times before pulling him away from the Pietà.

Cassily and Davidson returned to St. Louis, where they restored over 36 dilapidated Victorian buildings and built six new townhouses, for which Cassily designed the architectural embellishments. He began to make sculptures professionally, becoming known for his public pieces that depict animals such as turtles and hippos.

Eventually, the couple moved to Hawaii, where Cassily carved wooden figures until he grew tired of the island life and returned to his native St. Louis to earn a master’s degree in art at his alma mater. There, he met sculptor Gail Soliwoda, whom he married after divorcing Davidson.

In 1993, Bob and Gail Cassilly purchased the mostly vacant International Shoe Factory building at 69 cents a square foot. It would be transformed into what the Cassily’s called, “a city within a city.”

Working with a team of sculptors, welders, and painters dubbed the Cassilly crew, work began immediately, but exactly what was being built was a secret. Only a 500-foot concrete and wrought iron serpent fence constructed around the warehouse’s parking lot gave the world any indication of what was to come.

Inside the Cassily Crew’s work would stay hidden for almost two years. It wasn’t until New Year’s Eve 1996 that a group of visitors were allowed into the museum to see the work in progress. From there, construction continued, and City Museum officially opened to the public on October 25, 1997, with Bob and Gail’s children welcoming several thousand inquisitive visitors.

Inside the museum, they were greeted with two floors of exhibits, including the iconic giant whale sculpture that swallows an accessibility ramp between the lobby and first floor, the Circus Harmony, an internationally celebrated social circus, featuring acrobats, jugglers, clowns, and magicians that delight visitors with regular performances, and one of the most popular attractions at City Museum – the World’s Largest Underwear. Located under a glowing sign that reads “Semper ubi sub ubi,” artist Bill Christman hung a giant pair of men’s briefs, a decision he has never revealed the motive behind. The display has attracted visitors from around the world, has a Canadian fan club, and is the fourth most photographed installation at City Museum.

As the museum’s popularity grew, so did the exhibits. Always intended to have deep urban roots, Cassily and his loyal crew of artisans continued to construct the museum from the very stuff that makes a city – concrete, iron, limestone, bricks, rebar, tile, stone; gears, beams, wheels, belts, valves, tanks; bridges, buses, planes, facades, cranes, doors, fire trucks, walls, and locomotives. City Museum is filled with remnants of houses, churches, schools, storefronts, and factories reclaimed from St. Louis and given a new life.

Cassilly, who died in 2011, envisioned City Museum as a place to collect the artistic creations of his imagination, creations that were often labeled child-like. As a non-profit, the museum struggled for years before Cassilly managed to turn it into a thriving for-profit institution. At his memorial, Mayor Francis Sly said, “City Museum could easily have failed a thousand times in less creative and timider hands, but under Bob’s quirky leadership and with his refusal to give up, many dedicated artists … came together to create something that worked in a wonderful and inimitable way.”

The City Museum has been credited for revitalizing a once desolate area of St. Louis, and today, nearly a million people come to climb on and play in the various exhibits in the museum each year.

City Museum is not finished, and never will be. They’re always building, and none of the construction is ever behind closed doors. You can see the work and installation in progress. You’ll find something different every time you go.

Dress for an active day. Most visitors stay about three hours. Many stay all day. Some areas are seasonal or weather dependent. There are no maps of City Museum, it’s one big exploration, and it’s open at least five days a week, often closed on Mondays, Tuesdays, and Wednesdays in the slow season.

If you’re a National Park lover, check out the America’s National Parks Podcast, or come listen to Abigail and me talk about our life on the road with our three boys on the RV Miles Podcast.