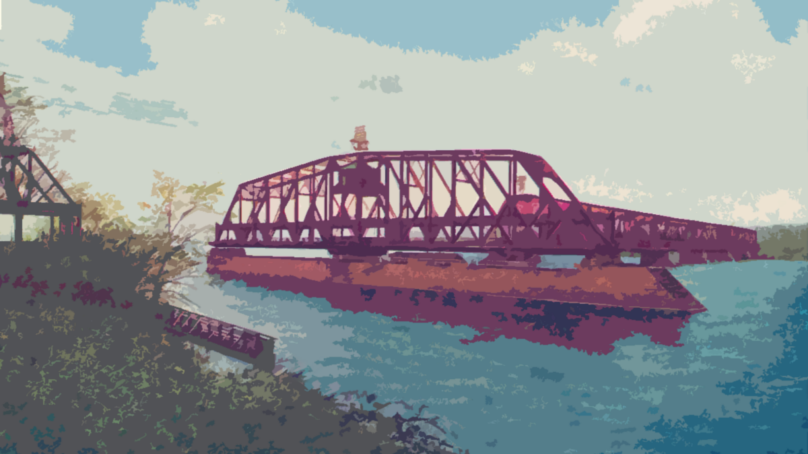 every time a bull’s eye salesman. But he doesn’t know the territory!

Rock Island is one of those towns that pops up in nostalgic culture over and over, but not a lot of people know where it is or much about it. It’s almost mythical in a way, due especially to the Rock Island Line, a real train route, short for the Chicago, Rock Island & Pacific Railroad, memorialized in the folk song of the same name recorded by dozens of greats, including Bobby Darrin and Johnny Cash.

Rock Island is featured in Jule’s Verne’s Around the World in Eighty Days as the place where Phileas Fogg crosses the Missississippi. It’s where Ashley Wilkes is imprisoned during the Civil War in Gone With the Wind, and it’s where the Blues Brothers, Jake, and Elwood, grew up in a roman catholic orphanage, learning the blues from a janitor named Curtis. Their blood brotherhood was sealed by cutting their middle fingers with a string said to come from the guitar of Elmore James.

But there’s nothing mythical about Rock Island. I should know — it’s where I grew up. It’s a real “river city” steeped in plenty of real history.

But Rock Island’s story begins long before the advent of football. And we’re not exactly here to talk about the city itself. Rather, the actual Rock Island, the largest island on the Mississippi River, for which the town is named.

This week, the island now known as Arsenal Island in Rock Island, Illinois.

History of the Rock Island Arsenal:

In 1816, Fort Armstrong, one of a chain of western frontier defenses the United States built after the War of 1812, was erected at the foot of Rock Island. The fort served as military headquarters during the Black Hawk War of 1832, and was abandoned in 1836, but remained an ordnance depot until 1845.

George Davenport originally came to Rock Island as the sutler for Fort Armstrong. By 1818, he resigned and established a more lucrative trading post on Rock Island. During the Black Hawk War, he served as the quartermaster for the militia and troops, earning him the honorary title of Colonel and $20,000 in compensation.

In 1833, he built a mansion on Rock Island overlooking the Mississippi. When he lived in the home, the city of Davenport, Iowa, was mapped out and named after him and the first meeting to bring the railroad to the area was held. An outlaw gang murdered him in his home on July 4, 1845.

11 years later the Railroad Bridge Company completed the first railroad bridge across the Mississippi River. It was a wooden bridge with five spans and a swing span at mid-channel. Fifteen days after it was opened, the steamboat Effie Afton struck the bridge. The boat was destroyed, and part of the bridge was burned. This incident led to a famous court case that pitted steamboat interests against railroad interests. The railroad was represented by a young Springfield lawyer named Abraham Lincoln. The trial ended in a hung jury, and the US Supreme Court eventually found in favor of the railroad, and the bridge remained operational until a government bridge replaced it in 1872.

An Act of Congress established the entirety of Rock Island as a military base in 1862 – The Rock Island Arsenal. Major Charles P. Kingsbury, the first Commanding Officer, designed three buildings for the arsenal. In 1867, the Clock Tower Building was the only one completed. Today, it is the home of the U.S. Army Corps of Engineers, Rock Island District.

Rodman also designed living quarters for himself and his military assistants. Quarters One, an Italian villa, was completed in 1871. It has 20,000 square feet of floor space divided into more than 50 rooms. It is considered the second-largest single-family government residence next to the White House.

During the civil war, the arsenal became a prison for Confederate soldiers – one of 21 prison camps operated by the Union. A total of 12,192 Confederate prisoners were held at Rock Island. The Barracks, always meant to be temporary, have been demolished, but the Confederate Cemetery remains. A total of 1,964 prisoners died. Each grave marker identifies the individual soldier, his company, and his unit.

Union soldiers died at Rock Island during the war, too, marking the beginning of what would become The Rock Island National Cemetery, one of 117 national cemeteries operated by the Veterans Administration throughout the United States. It’s among the 20 oldest national cemeteries, and one of the 30 largest. It covers 70 acres and has approximately 24,000 grave markers. 125 Union soldiers buried there include 49 members of the 108th Regiment of United States Colored Troops, who served as guards for the barracks. Most died from disease since sanitation was primitive as in all army encampments, and exposure to heat and humidity during the summers and freezing temperatures during winters. In 1864, deadly smallpox epidemics raged through the prison.

The Rock Island Arsenal is now the largest government-owned weapons manufacturing arsenal in the United States. Today it provides manufacturing, logistics, and base support services for the Armed Forces. The Arsenal is the only active U.S. Army foundry and manufactures ordnance and equipment, including artillery, gun mounts, recoil mechanisms, small arms, aircraft weapons sub-systems, grenade launchers, weapons simulators, and a host of associated components.

Some of the Arsenal’s most successful products include the M198 and M119 towed howitzers and the M1A1 gun mount. About 250 military personnel and 6,000 civilians work there.

It’s completely self-sustaining, too. It can make its own hydroelectric power and has its own water filtration plant.

The Arsenal is pretty special to me, because my grandfather, Hugh Epperson Jr, a veteran of the D-Day invasion, retired after 27 years as the Assistant Chief on the island. My grandmother Alice retired from the Weapons command department. The 95 and 92 respectively, healthy, and sheltering in place in their home just a couple miles from the Arsenal.

I remember when I was young, my grandparents would take me to the Arsenal for Armed Forces Day, and grandpa would always stop by the fire department and spend a good amount of time chatting with the firefighters about the good old days.

Visiting the Arsenal is a really neat experience. It is an active military base, so you do need identification to get on. You stop at a guardhouse and they perform a short security screening. If you pass, you get a card that gives you access for a year. It’s way less intimidating than it sounds, though temporary security restrictions can be implemented at any time.

On the Arsenal, you can tour the Colonol Davenport home, the oldest house in the larger area now known as the Quad Cities. You can also visit the Clock Tower Building, the Fort Armstrong Blockhouse, a 1916 replica of a portion of the fort built for the centennial celebration. You can also wander around the National Cemetery and the outside of Historic Quarters 1.

There’s a great museum that tells the history of the Arsenal, it’s the second oldest U.S. Army Museum in existence behind the West Point Museum, which opened in 1854. The museum’s main focus is many of the small arms and ordnance that were produced on the island.

The Government Bridge, built in 1896, is still in operation. It’s a double-decker bridge with double railroad tracks above and a roadway below. It was built on the same piers as the first Government Bridge of 1872, and its swing span can rotate 360 degrees for river traffic.

The Bridge is between the gates and roller dams of Mississippi River Lock & Dam 15. You can learn all about the Lock & Dam at one of the best attractions on the island: the Army Corps of Engineers Mississippi River Visitor Center. From January to March each year visitors come from all around to see the many Bald Eagles that flock to the locks and dams on the Mississippi during the winter months to feed. In early spring the river opens to commercial navigation, and you can watch massive barges pass through the locks. Tours of the Lock & Dam are offered in the summer months.

While you’re in the area, you might also want to check out the historic homes of the McClellan Heights Historic District in Davenport, just across the Government Bridge.