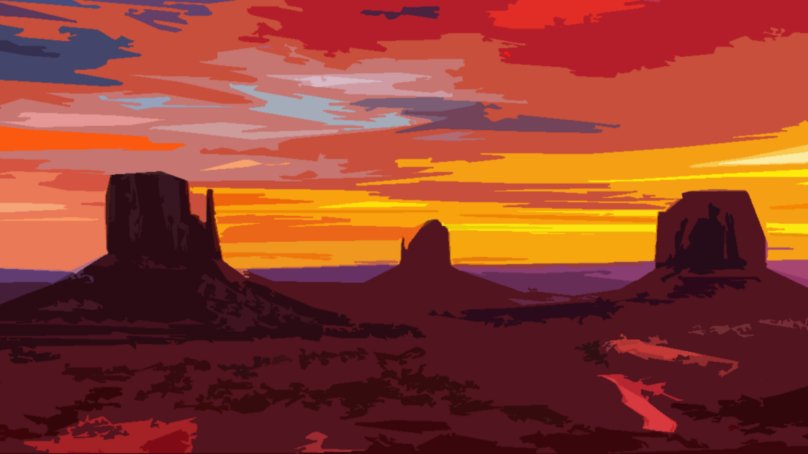 John Ford and John Wayne movies are probably more responsible for our image of the American west than anything else, and most of them were shot in one special location that is really like no other on earth.

Monument Valley Navajo Tribal Park is said to be one of the most photographed places on earth. I don’t know how true that is, the number of photos taken surely can’t compare with landmarks like the Eiffel tower and the Golden Gate Bridge due to its sheer remoteness. But it’s certainly the most iconic representation of the American West.

The valley is host to towering sandstone rock formations that have been sculpted over time and soar 400 to 1,000 feet above the valley floor. Technically it’s not a valley at all – as it’s not between two hills or mountains, but a massive swath of the Colorado Plateau at 5 to 6000 feet above sea level.

Combined with the surrounding mesas, buttes, and desert environment, it truly is one of the natural wonders of the world. Set aside by the Navajo Tribal Council in 1958, the park covers almost 92,000 acres in northern Arizona and southern Utah and lies entirely within the Navajo Nation reservation.

Like Arches and Canyonlands national parks to the north, Monument Valley showcases eons of nature’s erosive power, yet has distinctive formations unlike anywhere else in the world. The Rock layers were formed during the Permian and Triassic Periods several hundred million years ago. Layers upon layers of sediments settled and cemented in the basin, which then lifted up and became a plateau. Then wind, water, and temperature began the process of differential erosion, where hard rocks erode more slowly than soft rocks, leaving behind magnificent sculptures. The spires, buttes, and other formations are still slowly chipping away.

The valley floor is sand and siltstone stained with red iron oxide. It was formed during the Permian Period when the area was an ocean and is today known as Cedar Mesa Sandstone. The buttes above the valley floor are layered, with the lowest strata made from the easily erodible Organ Rock Shale formed during the Late Permian Period when rivers carried sediment from the ancestral Rocky Mountains.

That’s the geologic story. In the Navajo narrative, their people emerged into the Fourth World, and the Hero Twins killed the monsters that inhabited it. The carcasses of those monsters turned into the stone buttes of Monument Valley.

Visitors to this stunning place haven’t always appreciated the scenery. The first U.S. soldiers to explore the area in 1849 rebuffed it. Captain John G. Waler wrote that it was “as desolate and repulsive-looking a country as can be imagined. As far as the eye can reach toward the southwest, west and northwest is a vast mass of sandstone hills without any covering or vegetation except a scanty growth of cedar.”

Filmmaker John Ford would make the landscape of monument valley famous in the 1930s when he began filming Western movies there, like “The Searchers,” “Stagecoach,” and “She Wore a Yellow Ribbon,” defining what people worldwide think of when they imagine the American West. Monument Valley is still a favorite location for filmmakers. More recent Blockbusters were shot among the spires and buttes, like “Forrest Gump,” “2001: A Space Odyssey,” “Easy Rider,” “Back to the Future III,” “Mission Impossible, and Transformers: Age of Extinction.”

Today, ten Navajo families make their homes inside the park, where they live without running water or electricity and rely on farming and grazing for income – not an easy task among this unforgiving territory.

A 17-mile loop road takes visitors through Monument Valley, and the tribe asks that visitors respect their privacy by staying on marked trails and roads, and exiting before the sun goes down. The Navajo Parks and Recreation Department, which manages the park, shares this message with visitors: “The Navajo people have a custom that has endured. Whenever visitors come they are always treated as honored guests. They are offered shelter, warmth and nourishment so they can continue on with their journey. The same hospitality we offer to you, and we hope that you have a safe and pleasant visit to our land.”

Monument Valley is like a national park, but it falls within the jurisdiction of the Navajo Nation’s 27,000-square-mile territory in the Four Corners region of the United States. Of that 17 million acres, more than 91,000 acres are set aside as Monument Valley Tribal Park — a space larger than Arches National Park.

In addition to the loop road, the park offers two hiking trails and 11 lookout points. The most popular attraction is “The Mittens” — two enormous buttes that look like mittens with their thumbs facing inward. The Mittens can be seen from the visitor center and the rooms at The View hotel. An easy, three-mile hiking trail wraps around the west mitten.

Another popular destination is John Ford’s Point, a promontory at the edge of a plateau overlooking the desert. But stunning desert views and panoramas can be found throughout the park.

Navajo guides are available to take visitors through the land, and we highly recommend you book a tour over a self-driven experience, especially if you don’t have a rugged vehicle. The tours take you down into the valley in Jeeps for a narrated cruise through these mythical formations. Places such as Ear of the Wind and other landmarks can only be accessed via guided tours.

The visitor center also features a restaurant that specializes in both native Navajo and American cuisines, a snack & souvenir shop, and year-round restroom facilities. One mile before the center, numerous Navajo vendors sell arts, crafts, native food, and souvenirs at roadside stands.

Admission to the park is $20 per vehicle up to 4 people, and $6 each additional passenger. The visitor center is open every day except Thanksgiving, Christmas, and New Year’s Day.