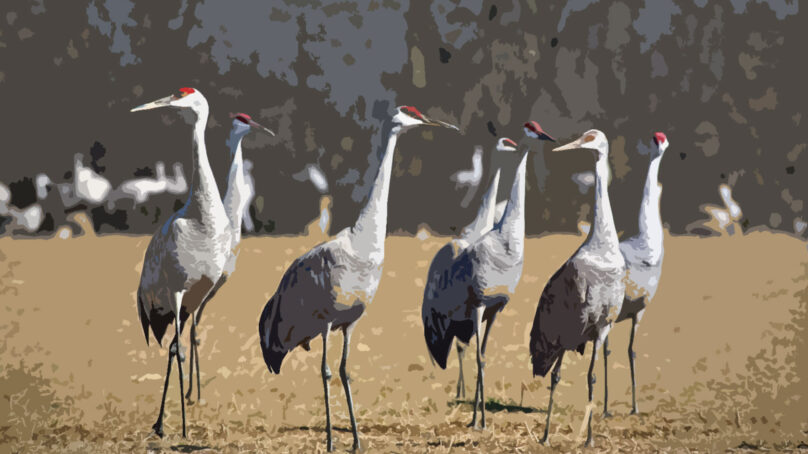 This episode of the See America Podcast was written by Lindsey Taylor, hosted by Jason Epperson, and narrated by Abigail Trabue.

In the heart of the rolling Great Plains, thousands of one of the largest flying birds on earth rest and feed in the light of the setting sun. They jump into the air, flap their wings, and dance after filling their bellies with corn and insects. Their calls echo across the river plains like bones rattling in the wind. Incredible as this scene is, it’s just one stop along an awe-inspiring journey.

History of the Platte River and Sandhill Cranes:

Next to sockeye salmon, monarch butterflies, caribou, and wildebeest, sandhill cranes are thought to make one of the last great migrations on our planet. At 4 feet tall with a wingspan of 6 feet, they are some of the largest flying birds on earth. Their global population is estimated to be as much as 800,000, but they can be seen from Mexico to the tundra of Alaska and Siberia. 80% of their global population embarks on an annual migration. They will travel two to three hundred miles per day, flying more than 30 miles per hour. The cranes are opportunistic flyers, meaning they use thermals and tailwinds to help them get to their destination each day. One of these destinations is the wide Platte River in Nebraska.

Described by early settlers as “a mile wide and an inch deep”, the river is the perfect place for cranes to rest and recharge on their migration route. Long ago, water and ice from the Rocky Mountains cascaded down the riverbed, forming channels and wide braided sections. Today, those channels provide roosting habitat for the cranes when they’re finished feeding in cornfields each afternoon. Aside from agricultural crops, cranes will also eat seeds, grubs, earthworms, snails, small reptiles and rodents, amphibians, and plant tubers.

The Platte River, located in the grassy plains of Nebraska, is the heart of the migration route known as the “Central Flyway”. Imagine an hourglass shape stretching from Mexico north to Alaska and Siberia. The flyway narrows to an 80 mile stretch in Nebraska, where 80% of sandhill cranes will find themselves between February and April of each year.

Cranes have had a significant role in North American culture for hundreds of years. Many Native American myths feature cranes as main characters, crane feathers are used in ceremonies, and ancient and modern art features cranes. Tools made from crane bones were even found in Chaco Canyon, an ancient Anasazi settlement in northwestern New Mexico, that were created over one thousand years ago by ancestors of the present-day Pueblo people. Whistles blown before battle were carved from the wing bones of sandhill cranes by the Crow and Northern Cheyenne of Montana.

Prehistoric rock art depicting cranes has been found in the American Southwest, as well as in Europe, Australia, and Africa. The crane is a clan totem for many Native American cultures, meaning it is a symbol of a family or kinship group. In New Mexico, the Sandhill Crane clan is one of many clans in the Zuni Pueblo. Traditionally, crane and Loon clans in Ojibway culture serve as tribal leaders.

As the cranes migrate north, any single cranes start pairing up. One of the most spectacular parts of the migration in the spring is the spectacle of mating dances that take place. Sandhill cranes bow, jump, flap their wings and throw plants or sticks into the air. These dances help them choose their partner. When a male and female crane perform a unison call together, they have bonded and mate for life.

Once the cranes reach their final destination, they will nest in or near small wetlands. They use plants that are abundant in their habitat to build the nest: cattails, sedges, grasses, or bulrushes. On the inside of the nest, they line a hollow area with smaller twigs. The female will lay 1-3 eggs, though generally, only one egg will make it to fledging when the chicks are old enough to fly.

Sandhill cranes are well-adapted for this treacherous yearly trip. They have sharp bills with serrated edges to probe frozen soil. While we may not be able to stand for long in near-freezing spring river water, cranes are able to reduce the blood flow in their feet by constricting blood vessels. Their arteries and veins are located next to each other, so that the warm blood coming from their heart travels alongside cold blood coming up from their feet, warming it before it again reaches their heart.

Their feet have claws, which act as tools, but also weapons. Foxes, coyotes, wolves, raccoons, ravens, eagles, and owls may hunt sandhill crane eggs, nestlings, or even injured or sick adults. Their 6-foot wingspan helps them balance and then jump and strike aggressors with their feet.

Today, only 10 percent of the habitat in the prairie is suitable for sandhill cranes. Those that migrate are coming to the Platte River earlier every year.
With man-made dams, sediment is no longer able to flow down the river and create the wide river sandbars. If the river habitat is lost, there is nothing comparable for the sandhill cranes to use on their migration route.

Sandhill cranes are not the only species facing threats in the Americas. In the last 50 years, North America has lost around 3 billion birds (more than a quarter of the pre-existing population). Certain species and families have been hit harder than others.

This has been called a biodiversity crisis in North America. Our greatest losses aren’t only occurring in rare and threatened species but in common ones. Losing so many individuals from our most common birds species may have a disproportionate effect on our ecosystems and food webs. Birds help with seed dispersal, pest control, and pollination in our environments, and they even benefit our economies. 9.3 billion US dollars are spent by 47 million people per year on bird-related activities in the U.S.

In breeding, and wintering areas, habitat loss and the use of toxic pesticides have the largest negative effect on native grassland populations in North America and around the world. While the Sandhill Crane is listed as a Species of Low Concern, it is important to know the loss that other species around the continent and world are facing. Statistically, only one sandhill crane chick survives to fledgling per breeding pair, making the sandhill crane population slow to recover. Conserving wetlands in the range of large migratory flocks is crucial to continued conservation of the sandhill crane.

Sandhill Crane Festival and When to Visit:

The best time to see the sandhill cranes migrate north is between late February to early April, with peak viewing season occurring in the last two weeks of March. Ducks, geese, shorebirds, eagles, and whooping cranes can also be seen as they migrate through the Platte River Valley. This year, Audubon’s Nebraska Crane Festival would be celebrating its 50th year in Kearney, Nebraska. But, of course, with the spread of the coronavirus, all events have been canceled. In the past at the festival, environmental speakers from around the country have share their own experiences in conservation and hundreds of crane lovers come together to experience the largest congregation of sandhill cranes in the world.

Interested in an up-close viewing experience? Photography blinds and guided tours are available at Rowe Sanctuary when it re-opens after the coronavirus pandemic passes. If you’re heading out on your own, follow some guidelines to protect yourself and the sandhill cranes. Do not stop on roadways, and never approach birds. The entire flock can panic and fly away using essential energy they need for the rest of their migration. Use your vehicle as a “blind” and stay in your car or next to it so you don’t disrupt feeding, and know that harassing cranes by honking your horn or yelling is illegal.

Seeing and hearing the sandhill cranes in the Platte River valley is an incredible opportunity to witness one of the last great migrations on our planet earth. Supporting organizations like the Rowe Sanctuary and Audubon Center and the Crane Trust can help protect the sandhill cranes and their migration in the future.

This episode was written by Lindsey Taylor, whose blog “The Curiosity Chronicles” follows her adventures around the world.