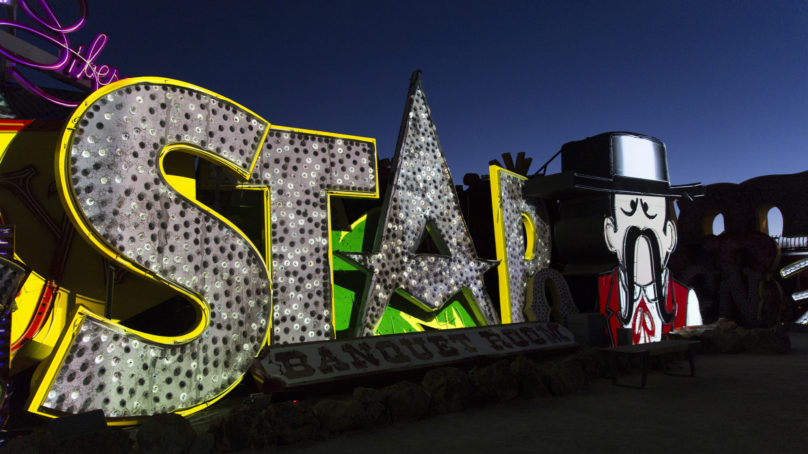 Las Vegas, Nevada. The quintessential Road Trip destination. For nearly 100 years it’s been the American epicenter for gambling, live spectacles, shotgun weddings, magicians, and all sorts of assorted vice. Its proximity to Southern California ensures the desert oasis is fed with a continuous supply of visitors, and its reputation for hospitality delivers a steadfast flow of people from around the world.

Las Vegas was born out of the building of the Hoover Dam. The influx of young male workers were prime customers for theaters and casinos, which were happily provided by the Mafia.

Today, the Hoover Dam is still the lifeblood of Vegas, powering its raucous demand for electricity, especially air conditioning and lighting,

And oh the lighting there is. The scale, the design, the glitz. The neon.

Welcome to season one of the See America Podcast. From coast to coast, we See America one mile at a time, discovering stops along the way that are eclectic, historic, ridiculous, breathtaking, inspiring, and humbling.

On this episode we swing by The Neon Museum in Las Vegas, Nevada.

Las Vegas is a relatively young city, having begun its life as a railroad stop between Los Angeles and Salt Lake City in the early 1900s. The railroad purchased Helen Stewart’s Las Vegas ranch, originally the site of a Mormon Mission, and auctioned off lots to create a town in 1905. Las Vegas wasn’t officially incorporated until 1911, but 1905 is emblazoned on the top of the Golden Nugget casino’s sign as the commonly used date-of-birth. Las Vegas means “the meadows” in Spanish, and refers to the water that was available in the area as travelers crossed the Mojave desert. During those early days the city catered to visiting workers and new arrivals by providing hotels, boarding houses, restaurants, saloons, and gambling establishments. Businesses advertised with painted wood and canvas banners in the very early years, until the first neon sign was erected at the Overland Hotel in 1928. In the 1930s, while the rest of the nation struggled through the Great Depression, Las Vegas was booming due to the construction of the Boulder Dam, which was later renamed the Hoover Dam. This project brought thousands of workers and their families to the area, as well as tourists who wanted to see this marvel of modern engineering.

Coincidentally, the 1930s also saw the loosening of gambling and divorce laws at the end of Prohibition. Nevada law required a six-week waiting period for a divorce, and separated couples would often stay the whole waiting period in town, while dropping their spare dough in the casinos.

In the late 1940s, the development of the Las Vegas strip began, complete with huge signs called “spectaculars,” featuring wild designs aimed at attracting tourists into the casinos. Spectaculars adorned fairly non-descript two-story buildings, making them flash with pizzaz while adding height. And they worked. The glitz and glamour of the strip attracted more and more tourists.

Without many trees or buildings in the southwest, the glow of neon signs could be seen from miles away at night. Western motels used the neon medium perhaps more than any other business. This was also perhaps afforded by the low profile of casino and motel buildings when casinos within Las Vegas’ city limits were once limited to two stories.

The famous “Welcome to Fabulous Las Vegas” sign, which still stands on the median of Las Vegas Boulevard South, was built in the 1950s, and designed by Bey Willis, a woman who held off the male-dominated design industry to successfully design many more signs, including the Moulin Rouge.

The end of a building’s life in Las Vegas is nearly as spectacular as the neon signs that adorn them. The Dunes, the Sands, the Aladdin, Castaways and the Stardust, along with dozens of other casinos and hotels, have been wiped from the skyline in controlled implosions. But those signs needed to be saved. For many years, the Young Electric Sign Company stored many of these old signs in their “boneyard.” where, if they weren’t repurposed into another sign, they slowly began being destroyed by exposure to the elements.

In 1995, the historic Sands was imploded. There was no place to store the massive sign, and it was scrapped. That didn’t sit well with many Las Vegans, as the Sands was only the seventh big casino built on the strip, and played host to the likes of, Judy Garland, Lena Horne,, Jimmy Durante, Jerry Lewis, Bobby Darin, and of course, it was the playground for Sinatra and the Rat Pack.

A partnership was formed between the Allied Arts Council of Southern Nevada and the City of Las Vegas to find a way to protect these historic pieces.

They formed the Neon Museum.

The non-profit entity marked its official opening in November of 1996, with the restored Hacienda Horse & Rider sign at the intersection of Las Vegas Boulevard and Fremont Street. Access to the rest of the collection was by appointment only.

Nearly a decade later, the lobby of the midcentury-modern masterpiece La Concha motel, was donated to the museum, which moved and reassembled it 4 miles north along Las Vegas Boulevard after cutting it into eight pieces. After $3 million dollars was spent on moving and restoring it, the high-arched lobby became the museum’s visitor center. The museum was then able to raise another 3 and a half million for a nearly 3 acre park and the restoration of 15 signs.

Today, you can explore the hundreds of signs in the Neon Boneyard. Most are unrestored relics of a time gone by, only 8 have been fully refurbished, most of the rest are lit by ground lighting at night.

The layout of the Neon Boneyard was the vision of former Executive Director Danielle Kelly, who was inspired by the Young Electric Sign company’s outdoor storage area where decommissioned signs are placed and waiting to be reused or scrapped. The signs often look as though they were placed without rhyme or reason, but that was Kelly’s intention.

A new exhibit that opened last year helps bring many signs back from faded glory, if only for a few hours a day.

Winslow and his team came up with a thrilling way to illuminate dilapidated signs in the museum’s north gallery. They used an array of video projectors and a technique called projection mapping to accurately wrap images around the signs in a show that makes them glow and flash like the original showstoppers they once were, while adding video montages of historic Vegas, set to a fitting soundtrack including Frank Sinatra and Elvis Presley played though a unique sound system.

“Brilliant!” is, in a word, brilliant. It’s a one of a kind attraction, and the Neon Museum is one of the few places you can go in Las Vegas to get a real sense of the history of Sin City.

You can view the collection through either an hour-long guided tour or a at your own pace on a self-guided tour most days. Tours are available seven days a week but tour times vary based on the season.

The 25-minute Brilliant! performs almost every evening on the half-hour until close.

Enjoying See America? We’d love a 5-star review on Apple Podcasts, and don’t forget to check out the entire line-up of the RV Miles network of podcasts, including the National Park focused America’s National Parks and the RV and travel focused RV Miles.