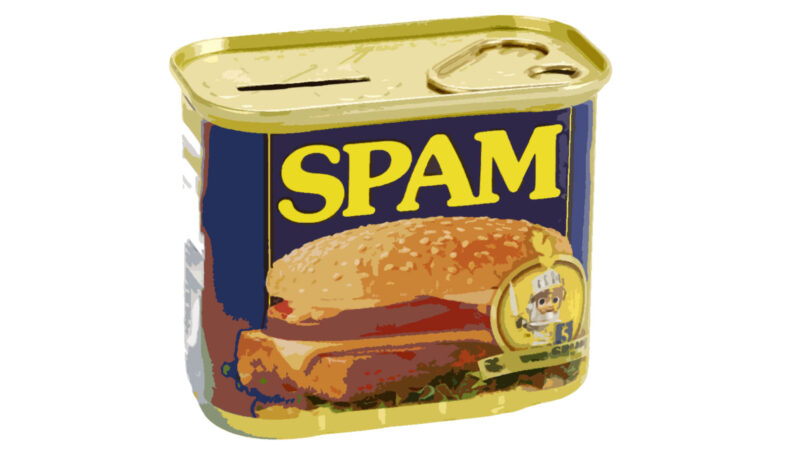 Pork, Salt, Water, Sugar, Potato Starch and Sodium Nitrate. 6 simple ingredients, cooked in a can make up the world’s most polarizing Meat product. When it first came off the production line in 1937, it won over the hearts of soldiers, world leaders, celebrities, chefs, kids and parents. Some scorn its very existence, but it’s more than likely they never tried it. It was born in a small Minnesota town, but is now celebrated in cultures around the world.

Let’s See America with a road trip to the the SPAM museum, in Austin, Minnesota.

We’re making a meal that’s been in my family for a few generations. And some form of it in many other families across the world. Spam and ramen is probably the most common, but we do spam and spaghetti noodles. Dice up some spam, saute it with some diced carrots, toss it in the cooked spaghetti with some teriyaki sauce. Done.

You can even get Teriyaki flavored SPAM straight from the can. In fact there are lots of varieties of SPAM, including Hickory Smoke, Hot & Spicy, Black Pepper, Garlic, and SPAM with Bacon.

The famous meat in a can is a polarizing thing. In some circles, it’s a no-go, but in many cultures, it’s a staple — especially Hawai’i, Guam, the UK, Hong Kong, and Korea.

Today, amidst the coronavirus pandemic, people are emptying the grocery stores to keep an extended supply of food in their homes. Many are reconsidering the benefits of SPAM since it doesn’t need refrigeration and has a long shelf life.

Hawai’ians have been eating SPAM for more than 80 years. It’s been nicknamed the “Hawaiian steak” and is even found on McDonald’s and Burger King menus in the Aloha state. During the last week of April, the annual Spam Jam takes place in Waikiki. It’s one of the most popular festivals in Hawaii because of its great food and entertainment in a family-friendly atmosphere. And before taking office, Hawaii’s most prominent native son, Barack Obama, surprised reporters when he ordered SPAM musubi while on vacation in Oahu.

Musubi is a Hawai’ian specialty, similar to sushi, in which the main ingredient is tied to a block of rice with seaweed. Most often you’ll find it made with marinated SPAM.

Hawai’ians eat 7 million cans of the stuff a year. Many think that’s because it’s so expensive to get fresh meat shipped to remote islands. But that’s only part of the truth.

SPAM first hit grocers’ shelves in 1937, during the Great Depression. It was invented as a way to peddle the then-unprofitable pork shoulder by Jay Hormel, son of George Hormel who founded the Hormel company. The name is a bit of a mystery. The brother of a Hormel vice president won $100 in a contest to name the canned meat. But it’s never been entirely clear what the word “Spam” means, if anything. The official word from Hormel is that nobody remembers. Hormel himself claimed the product was named for a combination of the words “spice” and “ham,” despite the fact that neither ingredient appears in it.

There’s no single Hormel team member credited with the final ingredient blend, but Julius Zillgitt was responsible for the original 12-ounce can size. Zillgitt and his colleagues eventually discovered that canning the pork in a vacuum prevented the meat from sweating inside the can.

The production process is fairly simple. First, the pork and ham are pre-ground. Then, salt, sugar and the rest of the ingredients are added and mixed for 20 minutes. From there, the mixture is moved over to the canning line, where it’s filled into the familiar metal cans, 12 ounces at a time. Once filled, cans are conveyed to a closing machine where lids are applied through vacuum-sealing. Next, the cans are cooked and cooled for about three hours. Finally, labels are applied and then the cans are cased for distribution.

SPAM’s explosion in popularity arose after Hormel shipped out over 100 million cans to the Pacific during World War II, where it made an inexpensive yet filling meal for U.S. troops. It remains popular in areas where soldiers were stationed, especially in Hawaii, Guam and the Philippines.

SPAM was also consumed by Russian forces during the war. As the former Soviet Premier Nikita Khrushchev wrote in his memoir: “Without Spam, we wouldn’t have been able to feed our army. We had lost our most fertile lands.” The Hormel Corporation provided 15 million cans to Allied troops every week. Between 1941 and 1945, Hormel had shipped over 100 million pounds overseas. Spam also became part of aid packages when the war ended to devastated Europe and Russia.

Troops started to complain about eating Spam for as many as three meals a day, and Hormel faced an unexpected anti-Spam backlash. They kept a file of hate mail from angry GIs.

After the War, SPAM lost the battle to become a staple in the US, however. As GIs returned home, they wanted fresh meat on the table. To keep up sales, Hormel hired singers to tout the product, and even had a radio show Music With the Hormel Girls. SPAM began to become more popular as an ingredient in dishes than a slice-on-the-plate main course.

But in Asia, a generation grew up on SPAM due to the war. In Hawaii, unlike the mainland, they couldn’t intern all the Japanese. Instead the United States placed sanctions on Hawaiian residents, ending the deep-sea fishing industry that was mainly run by Japanese-Americans. Since islanders were no longer allowed to fish, one of the important sources of protein for the islands vanished. Spam filled the void.

In Korea, where American forces returned during the Korean War “Army Stew” became a wartime staple. SPAM was smuggled from U.S. Army bases and simmered with broth and spices. Today, SPAM is seen as a luxury item in South Korea, and is a popular gift for the Lunar New Year, packaged in gift boxes along with cooking oil and seasonings.

The SPAM recipe, using pork shoulder, water, salt, sugar, and sodium nitrate for coloring remained unchanged until 2009, when Hormel began adding potato starch to eliminate the gelatin “layer” that formed in the can.

Today, SPAM is more popular than ever. A whopping 44,000 cans of spam, or 33,000 pounds, are produced every hour, to be consumed in more than 40 countries. Over 8 billion cans of SPAM have been sold.

SPAM is manufactured in the town of Austin, Minnesota, which occupies just under 12 square miles near the state’s southern border. It’s home to a street called Spam Boulevard, and plenty of restaurants with SPAM delicacies on the menu.

On 3rd Avenue, a quaint downtown strip, Hormel operates the SPAM museum. The museum originated in 1991 as the Hormel Foods First Century Museum, in celebration of the company’s 100 year anniversary. Located in Austin’s Oak Park Mall, Hormel later re-branded it as the Spam Museum.

A much-larger Spam-focused museum opened in September 2001. The 16,500-square foot space included a theater, historical displays, family activities and games, and a gift shop. The lobby had a wall of more than 3,300 Spam cans and, for many years, the theatre showed a short film entitled “SPAM: A Love Story. In late 2014, the museum temporarily closed while it moved to the new downtown location.

The new museum is comprised of seven main galleries. These include Can Central, the World Market, where visitors can learn about the advertising and use of Spam and Spam recipes from around the world; a World War II-themed exhibit, and Spam Brand 101, an interactive exhibit where visitors learn about 15 varieties of Spam and families are able to compete in the “assembly” of mock cans.

The museum is free, and guided tours are available on the hour every Saturday and Sunday, and anytime by request. Tours last on average around 30 minutes.

You might also consider Austin’s Historic Hormel Home, built in 1871 by John Cook, an area businessman and politician. In 1901 George and Lillian Hormel purchased the Italian style red brick home for $3000 and began extensive remodeling. They imported materials from Europe and brought George’s German heritage into the decor. They stuccoed the exterior and added columns to raise the roof line.

In 1927 George decided to retire from the company and he and Lillian moved to Bel Air, California. The Hormels were generous supporters of many Austin organizations and they were passionate about the need for a permanent home for a Y.W.C.A. to serve young women in Austin and those new to the city. They handed over possession of the home to the YWCA.

Self-guided tours are available to visitors Monday through Friday from 10 a.m. to 4:30 p.m. Admission is $5.
Occasionally, a private party will rent the home and tours will not be offered for walk-ins. Call ahead for availability.