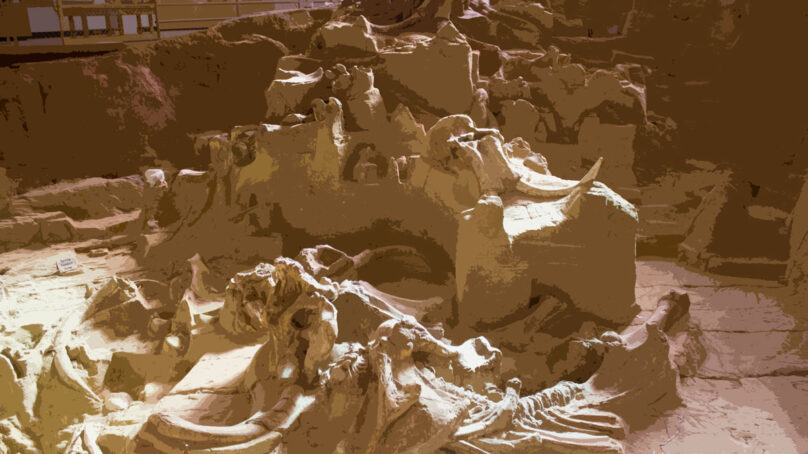 Heavy equipment operator George Hanson was grading a small hill when his blade struck something that shone white in the sunlight, changing the destiny of the little town for years to come.

Hot Springs is the Southern Gateway to South Dakota’s famous Black Hills – an isolated mountain range covered in dark pine trees in the geographic center of North America. The hills rise out of nowhere from the sweeping grasslands of the 5th least populated state.

Hot Springs gets its name from the seventy-five warm-water, mineral-rich springs that had been found centuries before by Native Americans. Hot Springs are a reservoir of geothermal energy in which porous rock containing water lies above a heat source. The heated water rises to a cap of solid rock, where fissures allow some of the warm water to flow to the surface as thermal springs.

Early inhabitants utilized these hot-water springs to ease bodily pains and treat illnesses. Local legend says the Cheyenne Indians became possessors of the springs, but a battle for custody of the waters took place on a peak overlooking the waters, now named Battle Mountain, adjacent to the city.

In the fall of 1881, five Euro-American men partnered to form a warm-water resort in the area, after coming to the Black Hills during the gold rush of the late 1870s. These five men and others who followed them built the town of Hot Springs.

The health spa businesses grew, physicians prescribed mineral water as treatments for their patients, and the region flourished. In 1885, the Fremont, Elkhorn, and Missouri Valley Railroad reached Buffalo Gap, within thirteen miles of Hot Springs, which encouraged one of the original five, Fred Evans, to concentrate his energies on the health resort business at Hot Springs.

The biggest development in baths was the Plunge, built by Evans in 1891. The building was constructed of wood, iron, and glass, and covered a pool approximately seventy by two hundred feet. Various slides, diving boards, rafts, and other accessories were provided for the enjoyment of the guests. Evan’s Plunge is still operating at the same site.

Although bathhouses were popular, more scientific health care was developing. This trend utilized the waters, but also offered broader services. The most important of these facilities was Battle Mountain Sanitarium, a national hospital for veterans. Construction of the million-dollar complex began in 1903 and was completed four years later. It still operates today as a VA hospital.

But back to that glowing white object in the dirt.

History of the Mammoth Site:

When George Hanson climbed down from his excavator to take a look at the bright white object he hit in the dirt of the new housing development in Hot Springs, he was shocked to identify it as bones. Staring at him was a tusk, about seven feet long, sliced in half lengthwise, along with other bones.

Landowner Phil Anderson figured he had something special, so he contacted three universities and colleges in South Dakota and one in Nebraska —none were interested in the find, nor did they have any desire to come and see what was discovered in Hot Springs.

Hanson then took some of the bones to his son Dan, who had taken classes in geology and archaeology. Dan Hanson realized these were no ordinary bones. He called his former college professor, Dr. Larry Agenbroad, who was on the faculty of Chadron State College in Chadron, Nebraska at the time, and asked him to come and take a look at the site. Dr. Agenbroad was in southeastern Arizona when Hanson called, excavating a site where mammoths had been hunted and killed.

The young Hanson kept a 24-hour watch over at the site until Dr. Agenbroad and his crew could arrive. Dr. Agenbroad’s first look at the number of bones exposed by the bulldozer told him there were at least four to six mammoths. He knew there had to be more.

Because of another commitment at the Hudson-Meng Bison kill site near Crawford, Nebraska, Dr. Agenbroad asked his colleague Dr. Jim Mead, and several members of his Arizona dig crew to spend 10 days salvaging and stabilizing the bones, tusks, teeth, and skull fragments that had been exposed. Landowner Phil Anderson offered to halt his housing project until they had a better handle on what was there. This short excavation proved significant, as an unprecedented number of specimens were uncovered.

Nearly 30,000 years ago, a cavern had collapsed creating a steep-sided sinkhole that was about 65 feet deep and 120 feet wide at the surface. Hot Springs’ warm artesian water percolated upward and filled the sinkhole as a steeply-sided pond.

Likely enticed by warm water and pond vegetation, mammoths entered the pond to eat, drink or bathe. Occasionally they would become trapped in the sinkhole, where they died of starvation, exhaustion, or drowning.

The pond slowly infilled with silt over a period of 350–700 years, and the artesian spring diverted to the Fall River as it cut deeper in the valley floor. Over thousands of years, the “hardened mud plug” inside the dried-up pond remained stable. The surrounding sediment eroded, leaving the sinkhole as a high point on the landscape for George Hanson to attempt to flatten with his excavator.

The warm spring waters created a pond that was attractive to other wildlife as well; findings at the site include the remains of other megafauna such as giant short-faced bears and shrub oxen, American camel, llama, and more.

The majority of the mammoth remains have been identified as those of Columbian Mammoths, although the remains of three Woolly mammoths have been found as well.

The Mammoths lived during the end of the Ice Age, when repeated glacial freezing and melting occurred all over the earth. Columbian mammoths are descendants of the Imperial mammoth of Europe, which date back to 1 million years ago. Although a distant relative of the well-known Wooly mammoths, Columbian mammoths grew much bigger than the Wooly to over 14 feet in height and an estimated weight of 20,000 pounds. ALso unlike their wooly cousins, Columbian mammoths likely had very little hair, up to 16 foot long tusks, and a sponge-like pad behind the bones of their feet that acted as cushions that absorbed and distributed their weight. They became extinct around 10,000 years ago.

In the year following the discovery, Dr. Agenbroad and Dr. Mead led a team of volunteer students to begin excavating the Hot Springs Mammoth site. Interest in the graveyard grew rapidly after a complete skull with tusks intact was unearthed.

They would dig in the summer months and rebury in the winter to preserve them. By the end of the 1975 summer excavation, Phil Anderson realized his 14 acres of land would be more valuable as a resource for scientific study rather than a housing development. Soon thereafter, through community commitment and Anderson’s generosity, the Mammoth Site of Hot Springs was formed as a non-profit organization. Dr. Jim Mead is still serving as the site’s Director of Research.

Today, the Mammoth Site is a working paleontological dig, with new discoveries still untold. And you can get a front row seat to the action.

The experience takes place indoors, in a climate-controlled building that is fully accessible. Over 1,200 bones have been found in the sinkhole. There’s no touching: The fossils are not petrified or turned to stone. The geological conditions at the site did not allow the bones to petrify so they are very brittle and can only be handled by trained professionals.

The Mammoth Site is open every day, except New Year’s Day, Easter, Thanksgiving, & Christmas. Hours vary by season. The pricing is very affordable, and pets are welcome on a leash.