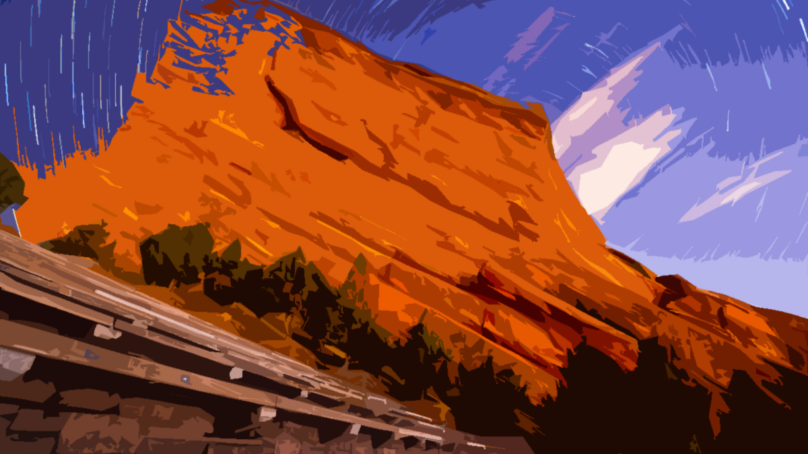 In the western suburbs of Denver, Colorado, lies a unique music venue that many consider the finest in the world. With Mother Nature as the architect, this acoustically perfect amphitheater has hosted some of the greatest performers in the world for over a century and is the location of some of the most famous live albums ever recorded. What is this musical haven? Red Rocks Amphitheater.

What is Red Rocks?

Red Rocks is a geologically formed, open-air amphitheater that is not duplicated anywhere in the world. It’s a completely natural formation that rivals any concert hall. There is a large, tilted, disc-shaped rock behind the stage, a huge vertical rock angled outwards from stage right, several large outcrops angled outwards from stage left and a seating area for up to 9,525 people in between.

The rocks serve as more than the walls of a theater. They are a history book of animal and plant life in the area for the past 250 million years. As spectators gaze at the towering red sandstone rocks, the ancient tales of prehistoric times are always in view.

Gradual earth movement slowly raised the great sandstone ledges from the prehistoric ocean floor, to form the “walls” of the amphitheater. Within these walls is a record book of time, as nearby dinosaur tracks harken to the Jurassic period, 160 million years ago. Fossil fragments of the giant 40-foot sea serpent, Plesiosaur, the marine reptile Mosasaurus, and flying reptiles live within these walls for eternity.

Some of the rock formations in Red Rocks slope as much as 90 degrees, while others tilt backwards. The southern monolith that bears a resemblance to a ship is named “Ship Rock.” On the opposite side of the amphitheater stands “Creation Rock.” Both are taller than Niagara Falls.

In the early 1900s, publisher John Brisben Walker purchased the land with the proceeds of his sale of Cosmopolitan Magazine to William Randolph Hearst. Walker had a vision of artists performing on a stage nestled into the natural megaphone crafted by the surrounding red stone. Walker would have had no way of knowing. Still, Red Rocks Amphitheatre is a geological phenomenon – the only naturally-occurring, acoustically perfect amphitheatre in the world.

Walker produced a number of concerts between 1906 and 1910 on a temporary platform. The earliest documented performance at the amphitheater was the Grand Opening. Walker called the place “Garden of the Titans,” and the inaugural concert featured Pietro Satriano and his 25-piece brass band.

Two years later, on September 5, 1908, Walker produced the amphitheater’s largest-scale performance to date — the Feast of Lanterns. Commemorating the opening of the scenic road up to nearby Mt. Falcon, it was patterned after the festival of Nagasaki, Japan, and featured four military bands and fireworks off Mt. Falcon, Mt. Morrison and two intermediate hills.

Renowned opera singer Mary Garden put Red Rocks on the world musical map with her performance in 1911. Having performed at many opera halls around the world, she pronounced Red Rocks the finest venue at which she had ever performed.

From Walker’s dream, the history of Red Rocks as an entertainment venue began.

In 1927, George Cranmer, Manager of Denver Parks, convinced the City of Denver to purchase the area of Red Rocks from Walker for the price of $54,133. Cranmer then convinced the Mayor of Denver, Ben Stapleton, to build on the foundation laid by Walker. By enlisting the help of the federally sponsored Civilian Conservation Corps and the Work Projects Administration during the depression, labor and materials were provided for the venture.

Denver architect Burnham Hoyt designed the amphitheater with an emphasis on preserving the natural beauty of the area. The plans were completed in 1936, and Red Rocks was officially dedicated on June 15, 1941, though the actual construction continued, spanning the course of 12 years. In 1947, the first annual Easter Sunrise Service took place. Since then, Red Rocks Amphitheatre has attracted the world’s best performers to its stage.

The first performance of each season is the Easter Sunrise Service, a non-denominational event on Easter Sunday of each year, hosted by the Colorado Council of Churches. The event draws over 12,000 people from across the nation to watch the sunrise over the Red Rocks.

The earliest notable rock-and-roll performance at Red Rocks was by The Beatles on August 26, 1964, the only concert not sold out during their US-tour. Jimi Hendrix played at Red Rocks in 1968, along with Vanilla Fudge and Soft Machine. An incident during a performance by Jethro Tull on June 10, 1971, led to a five-year ban of rock concerts at Red Rocks. Approximately 1,000 people without tickets arrived at the sold-out show. Denver police directed the overflow, non-paying crowd to an area behind the theater, where they could hear the music but not see the band. The situation seemed satisfactory until some of the people without tickets attempted to enter by charging at, and breaking through, the police line. Some of those without tickets began lobbing rocks at the police, and the police responded by discharging tear gas at the gate-crashers. The wind carried the tear gas over the hill, into the paying crowd, and onto the stage. Following the “Riot at Red Rocks,” Denver Mayor William H. McNichols, Jr. banned rock concerts. For the next five years, shows at Red Rocks were limited to acts like colorado native John Denver, Sonny & Cher, The Carpenters, Pat Boone, Seals & Crofts, and Carole King. The ban on rock and roll was finally lifted through legal action taken by Denver concert promoter Barry Fey, who tried to book the band America at the venue in 1975. After being denied a permit by the city, Fey took the city to court, and the court ruled that the city had acted “arbitrarily and capricious[ly]” in banning rock concerts at Red Rocks.

Red Rocks was one of the favored venues for The Grateful Dead, and the venue has become a traditional stop for many subsequent jam bands. Widespread Panic holds the record for the most sold-out performances at Red Rocks with 60 as of last summer. Blues Traveler has played the venue every Fourth of July since 1993, except 1999 when lead singer and harmonica player John Popper was unable to play due to heart surgery. Jam band Phish was banned from performing at Red Rocks after they played four concerts there in August 1996. In an echo of the past, Phish fans who showed up to the concerts without tickets were accused of starting a riot outside the amphitheater on the second night, and the nearby town of Morrison was unprepared to accommodate the size of the band’s following. Phish was not invited to perform at Red Rocks again until July 2009.

Red Rocks isn’t just for concerts, however. The 738-acre park is a haven for outdoor adventure. A variety of trails are located within the park.

The Trading Post Trail is 1.4 miles in length, making its way through spectacular rock formations, valleys, and a natural meadow. The Red Rocks Trail runs through the east side of the park and is a multi-use trail for hiking, horseback riding, and mountain biking. It’s a dramatic 6-mile loop. The Funicular Trail is a short, steep ascent that connects the Upper North Lot with a small parking area along Trading Post Road, following the route of an incline railway, or ‘funicular,’ that carried tourists to the top of Mt. Morrison to enjoy the views. The Mt. Vernon Creek Trail is 1 mile in length, following the creek for a short distance before making a turn towards the lower south parking lot where it connects to the Trading Post Trail. Nice views of the amphitheater can be had along the trail as it travels through the meadows above the creek. The Geologic Overlook Trail is a short, moderate trail located in the Northwest corner of the park offering a picnic Shelter for a short hike leading to beautiful views.

Regular outdoor yoga events are held in the amphitheater, as well as outdoor films during the summer season.

Red Rocks Park is open daily from one hour before sunrise to one hour after sunset and is free of charge.