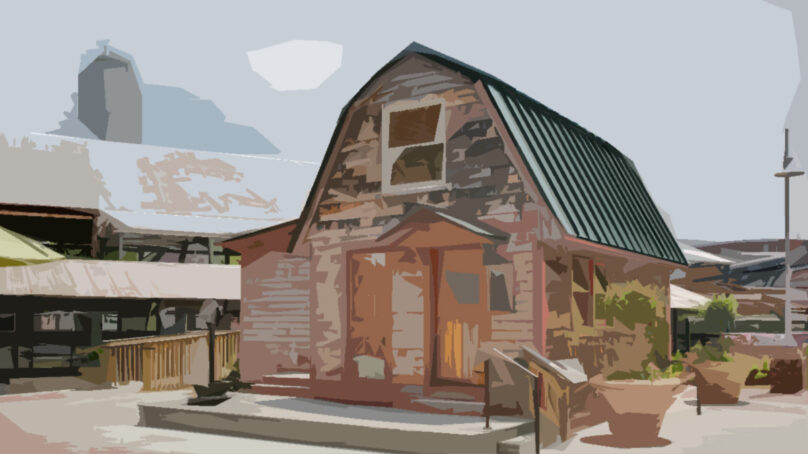 Durham, North Carolina. Home to possibly the most famous Minor League team in all of sports – the Durham Bulls. At least if you saw 1988’s Bull Durham starring Kevin Costner. In the years since the 8 and 16 Lollygaggers, Durham has witnessed a massive revitalization, as it turned the scars of an industry in free-fall into new life and prosperity.

History of Durham and the American Tobacco Campus:

The city of Durham wasn’t incorporated until 1869, in the wake of the Civil War. The location of the town is a result of the needs of the 19th-century railroad industry. The wood-burning steam locomotives of the time had to stop frequently for wood and water, and the new North Carolina Railroad needed a depot between the settled towns of Raleigh and Hillsborough. A railway depot was established on land donated by Bartlett S. Durham in 1849, and the area would be known as Durham Station for its first 20 years. Raleigh had become the state capital, and in April 1865, the Union Army, commanded by General William Tecumseh Sherman, occupied the town near the close of the Civil War. The last formidable Confederate Army in the South, commanded by General Joseph E. Johnston, was stationed in Greensboro, 50 miles to the west. After the surrender of the Army of Northern Virginia by General Lee at Appomattox on April 9, General Johnston sought surrender terms, which were negotiated between April 17 and 26 at the small farm of James and Nancy Bennett, about 3 miles west of Durham Station, half-way between the standing armies.

As soldiers on each side passed through Durham and the surrounding communities, they enjoyed the mild flavor of the area’s Brightleaf Tobacco, which was considered more pleasant to smoke or chew than they had ever tasted. After they returned home, they started sending letters to Durham to get more. During the war, a cigarette-rolling machine had been invented that produced over 200 cigarettes per minute, the equivalent of what a skilled hand roller could produce in one hour. It reduced the cost of rolling cigarettes by 50%. The combination of reconstruction and industrial revolution caused a massive tobacco industry boom.

The rapid growth and prosperity of Carolina tobacco companies lead to a mass consolidation as they merged into what would become one of the original 12 members of the Dow Jones Industrial Average in 1896. The American Tobacco Company was under control of the Duke family (of Duke University fame) and dominated the industry by acquiring tobacco companies across the nation, like the Lucky Strike Company and over 200 other rival firms. Within two decades of its founding, the American Tobacco Company produced 80% of the cigarettes and other tobacco products sold in the United States.

The company eventually amounted to what the federal government considered a monopoly. In the early 1910s, courts forced a breakup of Duke’s business under antitrust laws. They retained the now smaller, yet still mighty American Tobacco name, with manufacturing based in Durham.

The breakup of American Tobacco had an unfortunate effect on cigarette consumption, however. The competition between the new companies caused an increase in advertising and promotion, leading to more and more popularity.

The Dukes began investing in other ventures, like electrical power. The success of the tobacco industry encouraged the then-growing textile industry to come to town, with the early electrification as a large incentive. Textile mills doubled the population of Durham.

The company left Durham in the late 80’s for Reidsville, North Carolina. In 1994, British American Tobacco, one of the original spin-offs of American Tobacco, acquired its former parent. One thousand employees dropped to 300, and then 100, as the company continued to change hands. It’s been announced that it will close altogether this year.

When American Tobacco left Durham, massive downtown production facilities were abandoned, leaving a blight on the town’s heart. But Durham was thriving.

In a far-sighted move in the late 1950s, Duke University, along with the University of North Carolina in Chapel Hill and North Carolina State University in Raleigh, persuaded the North Carolina Legislature to purchase a large tract of sparsely settled land in southern Durham County and create the nation’s first “science park” for industry. Cheap land and a steady supply of trained workers from the local universities made the Research Triangle Park an enormous success which, along with the expansion resulting from the clinical and scientific advances of Duke Medical Center and Duke University, more than made up for the decline of Durham’s tobacco and textile industries.

In 2004, the previously abandoned American Tobacco Campus was reopened as a modern development, along with a new stadium for the Durham Bulls and the Durham Performing Arts Center, one of the busiest touring theater houses in the nation.

Local media company Capitol Broadcasting is responsible for the development, which is now an urban playground filled with office buildings, condos, shops, and restaurants. It’s almost a neighborhood unto its own: a foodie paradise, a shopper’s delight, and a center for innovation.

Near the source of the Old Bull River sits a seemingly inexplicable small cedar shake cabin among the renovated American Tobacco Campus. This is no ordinary cabin, but rather a historic monument to the creator of one of America’s greatest brands. The cabin of Burt’s Bees founder Burt Shavitz has been relocated from his beloved Maine, marking the entrance to the global headquarters of the company he co-founded, Burt’s Bees.

Burt Shavitz was born Ingram Shavitz to a Jewish family in Manhattan. He changed his name in 1953 when he finished high school, and after spending time in the Army, he returned to Manhattan, where he became a photographer, taking photos of urban life that appeared in Time and Life magazines.

Burt eventually settled in Maine, motivated by living a minimal lifestyle. He lived in a tiny home before tiny living was cool. His greatest treasures weren’t the things he owned; they were his golden retrievers, the sunsets, the snows, and the woods right outside his door. Perhaps that’s why he was able to live as simply as he did in a 300-square-foot turkey coop turned cabin without electricity or running water.

Burt began learning about beekeeping, and after gathering all of the supplies, he encountered a swarm on a fence post. He said it was an act of God, a no brainer. The swarm became his first hive.

Beekeeping became a source of income for Burt when he met Roxanne Quimby, who would sell his wax candles at local fairs. An increase in sales and production led to them launching Burt’s Bees in the 1980s. As the partnership and business grew, operations were set up in North Carolina in 1994, eventually moving to the American Tobacco Campus.

The company had Burt’s Maine cabin disassembled and reconstructed outside their front door as a reminder of Burt’s example of how to live simply, naturally, and responsibly. They’ve also built an observation hive on-site as a way to bring people face-to-face with the simple creatures who supported Burt’s livelihood and allowed him to thrive.

“I’m less interested in the inside of whatever it is I own than the outside of what it sits on.” – Burt Shavitz

For decades, the American Tobacco Campus and the City of Durham were one of the busiest industrial centers in the country, shipping products around the world. The end of the tobacco industry in Durham put the Bull City in a position to re-invent itself. Witnessing this re-imagination of a post-tobacco Durham is really quite special. You can spend your entire visit right on the American Tobacco Campus and never have to leave. The on-site Aloft hotel is hip and modern and wonderful. The Bulls and the Performing Arts center provide loads of entertainment, and pop-up shops, restaurants, clubs, and outdoor concerts fill out the rest. There’s plenty of parking on-site, and after every Friday home game, the Durham Bulls set off a fantastic fireworks display.

Once you’ve explored the American Tobacco campus, make sure to check out the rest of downtown Durham, which is full of unique restaurants, museums, art galleries, and boutique hotels.