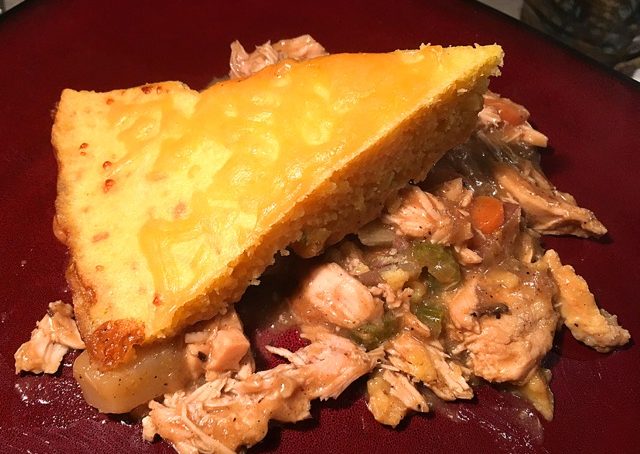 Who doesn’t like chicken pot pie? Well, who doesn’t like it besides vegans and vegetarians? About a month ago I decided to whip together this little number from scratch. It doesn’t really take that long, and if you want you can cheat and use a cornbread mix that you like. 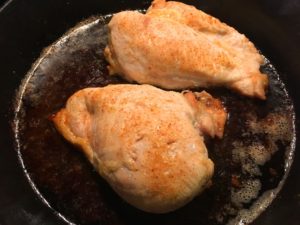 Use whatever you can find at the store. It doesn’t matter. Breasts, thighs, tenders, quarters, legs… Though I would stay away from wings. Too much hassle and not enough meat.

I tenderize my meats with a fork and then rub some seasoning into them. In this case, I used my “All Ya Need” seasoning mix (available at www.hardcoresmokehouse.com). It is important to get some flavor into the chicken as it cooks or it will just be bland protein when you are done. In fact, with a pot pie, it is pretty hard to over-season the chicken, just as long as you don’t overdo the salt. 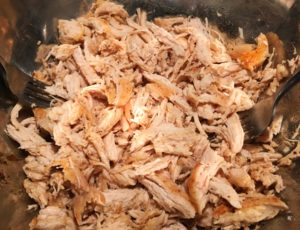 Now cook it. I don’t care how you do it. Bake it, pan fry it, smoke it, broil it. Whatever you have available and however you like it. I seared the breasts on both sides in cast iron and some salted butter before I baked them. I was going to smoke them in the electric smoker but it was cold and nasty outside. To me, smoking it will give you the most flavor, especially when mixed in with all the other ingredients.

After it is done (meaning the internal temperature has reached 165 degrees, or the juices are running clear) put it in a bowl and shred it with a pair of forks, or a set of bear claws, or your hands. Set it aside.

You can do this while the chicken is cooking. You’ll have time.

Whisk all the dry ingredients together in a decent sized bowl. Add the egg and most of the buttermilk and whisk until everything is incorporated. You can always add more buttermilk if you want it to be a little wetter. I use the 3 cups because I don’t like my cornbread too dry. If you are feeling a bit adventurous go ahead and toss in some lonely diced jalapeños or other hot pepper. Try not to overwork it, though. That is a basic rule for baking, no matter what you are making. 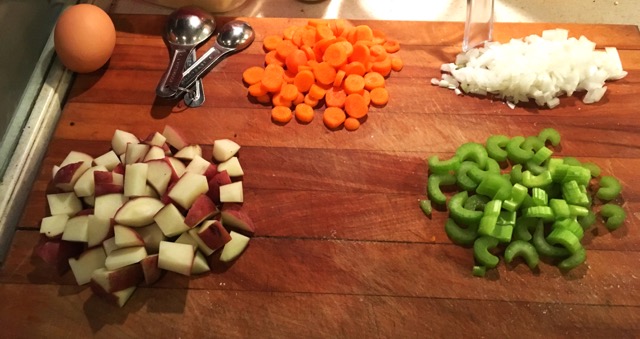 While the chicken was cooking you also sliced, diced, and chopped all your veggies, right? Thought so.

Use the drippings from the chicken as the base for your veggies. If you pan fried it (or even just seared it like I did) then you can deglaze the pan with a little white wine in order to stir up all those tasty little nuggets of flavor that are stuck to the bottom of the pan. Make sure you use a large pan because you will want room for the cornbread at the end. 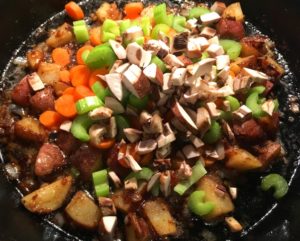 Toss in the garlic and onions over medium heat. You want to saute everything. Feel free to add some butter or a little oil if you don’t have enough drippings to get things cooking properly. Once the garlic and onions start to brown throw in your potatoes. They can be whatever potatoes you like, as long as they are in small enough chunks so that they will mix with everything else and not take forever to cook through.

When the potatoes start to get soft (about 10 minutes), go ahead and add the celery, carrots, and mushrooms. By now you have probably guessed that you can put whatever veggies you want in this pie. Don’t like carrots? Don’t use them. Try some different things in there. Be creative. Toss in some bok choy. Why not?

Let it all simmer together until the veggies are starting to soften up and the flavors are mixing together.

Putting it all together

Add the 1/4 cup of AP (all purpose) flour to your filling mixture and stir to get everything mixed together. This will add some texture to the mixture and will help keep it from turning into a stew instead of a pie.

Pour in the 2 cups of chicken broth. I don’t care how you made it. From scratch? Well done! From a can? Meh. From a really good concentrate by adding hot water to it? That would be better than from a can. Remember, the quality of ALL the ingredients makes a huge difference in the flavors and textures of your meal.

Bring the whole thing to a boil for about three minutes and then drop it to a simmer. Reduce the mixture by about 25%.

Now add the shredded chicken and mix it all around to make sure every ingredient is fairly evenly distributed. You don’t want your spouse to take a big bite and only get potatoes, right? 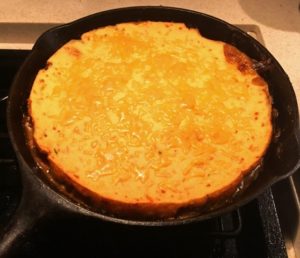 Add the salt and pepper and then whatever other spices you like. I enjoy some smoked paprika in there, but you can pretty much add whatever you think will taste good: Oregano, thyme, parsley, chipotle pepper, more garlic…

When the filling is to your liking, remove it from the heat. If you are using a large pan (cast iron, right?) you should have enough room to just pour the cornbread mix right on top of your filling. If not, you can bake the cornbread separately, and you can even do that a day ahead of time.

Pour that mix over the top, after you kind of smooth out the filling, of course. I also like to add some shredded sharp cheddar cheese to my mix, and I even add a little more to the top just before the cornbread is done. Try it.

Alright, put the whole shebang into an oven. Anywhere from 350-425 will be fine. If you are using a pre-made cornbread mix, I suggest following their directions so you don’t burn it. The cornbread is done when it is just starting to brown on top and a toothpick poked in the middle comes out clean.

Remove the pan from the oven and let it sit for about five minutes while you set the table. Cut it into wedges and serve! 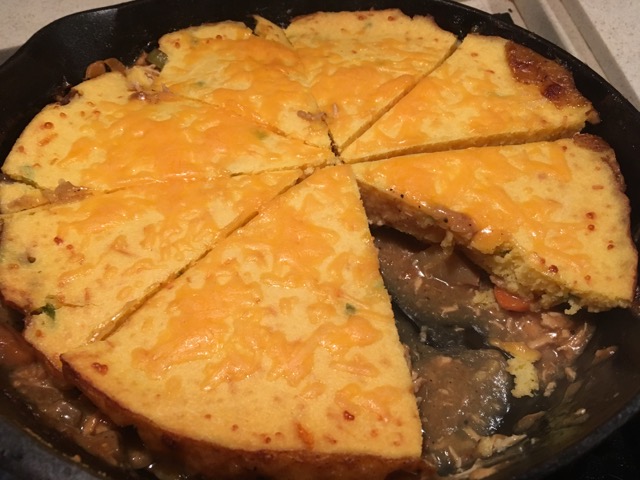 Serves about 4 with two pieces of cornbread for each person. If you want more filling you can easily double the recipe except for the cornbread. just make sure you have a pan that is big enough to fit it all in.

1 boneless. skinless chicken breast (whole or two halves)
1/4 of a white onion (or red, or Vidalia)
2- celery stalks (or more if you like celery)
1/4 cup carrots sliced or diced however you like them
1/2 cup baby red potatoes- skin on and cut into small chunks (I like different sizes and textures of ingredients instead of everything being uniform. It is more pleasing to the eye and the palate.)
1/4 cup mushrooms- diced (whatever kind you like: white button, baby portabello…)
4 cloves of garlic (Remember, at least one clove per person)
Fresh ground black pepper
Hickory smoked pink salt (or whatever salt you have on hand)

Tip: If you don’t have, or can’t find, buttermilk, you can make your own by mixing regular milk and lemon juice. Seriously.

Chef Hardcore has spent the last 20 years trying new recipes, resurrecting original ones from history, and perfecting more than a few. His passion lies in creating delicious food with simple processes and ingredients that make people smile with delight. He can be reached at chris@hardcoresmokehouse.com