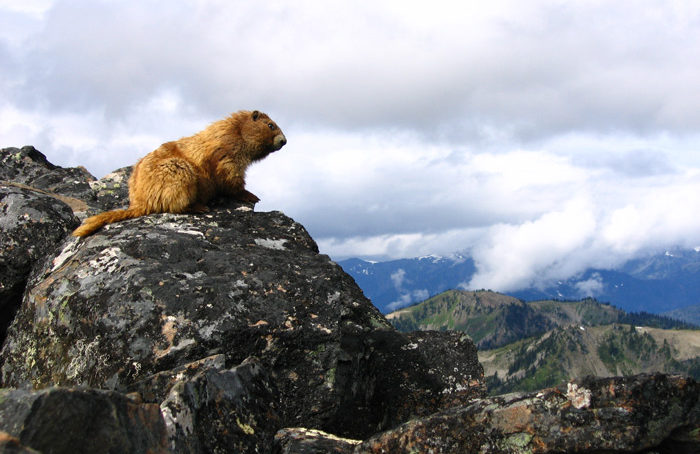 The Olympic marmot (Marmota olympus) is an iconic species of the Olympic Peninsula. They are the official endemic mammal of the state of Washington, found only in the alpine meadows within the park and surrounding national forest and nowhere else in the world.

More than 90 volunteers participate in the project each year, hailing from the Olympic Peninsula, Seattle/Tacoma area, and as far away as Portland, Oregon and British Columbia.

“Over the last years, the outstanding work and dedication of our marmot monitoring volunteers has provided important information for continued protection of the Olympic marmot,” said Olympic National Park Acting Superintendent Lee Taylor. “Citizen Science programs provide valuable data and unique opportunities for volunteers to take part in research that influences the management of their park.”

Volunteers must be capable of hiking to and camping in remote areas, navigating off-trail, and working on steep slopes. Survey trips are one to eight days in length. Most survey areas are located between five and twenty miles from a trailhead or road and involve a one or two day hike with significant elevation gain to reach. Survey groups camp out in or near the survey areas and search for marmots for two to four days.

A limited number of day hike assignments are available for the Hurricane Hill, Klahhane Ridge and Obstruction Point survey areas.

Volunteers work in groups of two to six people. To ensure safety, volunteers must travel and monitor with a partner. Volunteers ages 13-17 must be accompanied by a responsible adult.

All volunteers are required to participate in a one-day training that includes both classroom and field instruction. Volunteers are responsible for their own transportation. Camping fees will be waived at Heart O’ the Hills and other front-country sites for the evening before training. Park entrance and backcountry fees will also be waived for volunteers.

The 2017 application deadline is June 1, but may close earlier if enough eligible volunteers have been accepted, or last longer if some trips remain unfilled.

More information about the program is available at the park’s website.