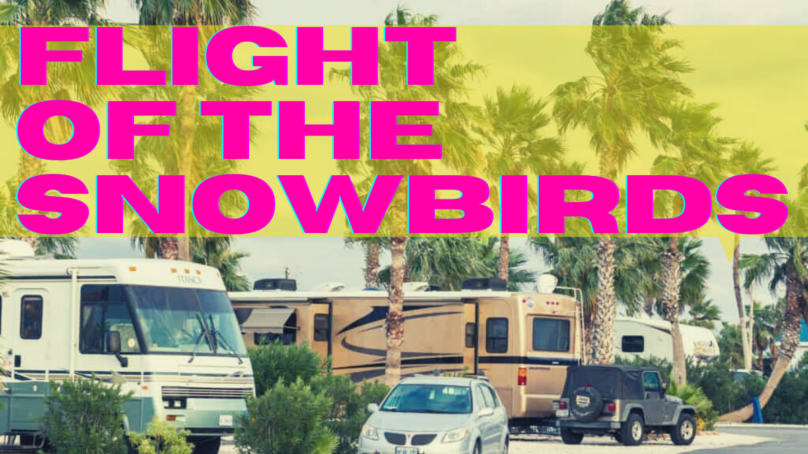 Prefer to watch? This episode, and past episodes of the news can be found on our YouTube channel.

From snowbirds to fuel prices to the winter weather outlook, this week we are focusing on upcoming travel trends. But first, in order to look forward, we have to look back. Specifically, with the 2021 summer season on public lands.

The Center for Western Priorities, a nonpartisan conservation and advocacy organization focused on protecting land, water, and communities in the American West has released a major report on camping’s rise in popularity on America’s public lands. The biggest finding in the report is that camping was well on the rise before the pandemic. This means that his boost in visitation could be here to stay.

In 2014, an estimated 39% of reservable lower 48 public lands campsites were filled during the summer months. In 2020 this increased to an estimated 54% by 2020. Summer weekends had a higher percentage of campsites filled, up to an estimated 60% in 2020. Those numbers include the many public campground closures and travel restrictions in early 2020.

Campsite occupancy increased more in the Western United States between 2014-2020 than the east, giving the region the highest occupancy rates. For instance, in Colorado summer reservations jumped from 64% over the six-year period.

The data doesn’t include anything in 2021, but clearly those numbers will drastically increase. And that’s with much of the travel industry still in recovery mode. 2022 could be an explosive year for American travel with the return of international travelers and more consumer confidence.

A survey of 5000 travelers just released from travel company Evolve points to more planned vacations and longer stays in 2022. The average respondent said they plan on 3 vacations of 5 to 7 days, and the great outdoors is their top destination.

58 percent are interested in hiking, biking, kayaking, and other wellness and relaxation experiences in the coming year, while the number of people planning vacations that involve urban experiences is only 15 percent.

But before we get to the 2022 travel season, we have to get through the holidays and winter. This holiday season, people still plan to stay closer to home than in an average year, according to Zeta Pulse. More people will travel for the holiday period than in 2020, but they won’t be going far, with 53% still citing COVID as their top concern.

Snowbirds are Ready to Fly

Snowbirds, however, are an entirely different story. People who usually head south to a warmer climate during the winter season are moving forward with their annual migration, probably in much greater numbers than in 2020.

Campground chain KOA projects that 12 million households – 31% of all active camping households – plan to camp between December and February, a clear indication that the popularity of camping will continue through the winter.

An estimated 2.4 million active households will spend three or more months snowbird camping. Another 9.6 million will take shorter snowbird trips of one to two weeks. To see the full report, and the most popular destinations click here.

Fueling some of that winter camping could be unseasonably warm weather in the south, and larger snowfall tallies in the north. This is according to the National Oceanic and Atmospheric Administration. who just released its winter outlook:

Fuel Prices on the Rise

There is one thing that could put a damper on travel in the winter and into 2022, however. Fuel prices. Around this time of year, the average price of a tank of gasoline usually begins to head down. In the past week, it’s gone up another 7 cents, now averaging about 3.38 a gallon. Largely due to the price of a barrel of oil sitting at a 7 year high.

But the worse news is that in Europe and Asia, the price of natural gas has become so high. This is leading natural gas-fired power plants are switching to oil as the energy source. Which means an increase in demand for oil. In China, flooding closed several coal mines, increasing the cost of coal, which has them switching to oil as well to produce power.

Of course, as usual, oil sources are artificially keeping production low in order to make back some of the money they lost in 2020 and prior. Many US oil companies are leery of once again oversupplying the market and they are focused on returning cash to shareholders who lost a lot over the past decade.

OPEC and its allies have only gradually increased the output that was sidelined in early 2020. For now, they seem content to let oil prices remain elevated, and we get stuck with really expensive fuel of all types.

Did you camp on public lands this year? What was your experience like? Let us know in the comments below.