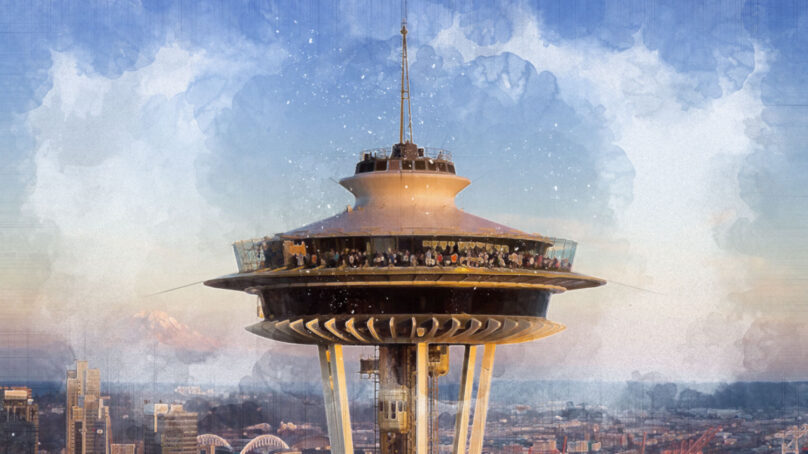 Rising high above the Seattle skyline is one of the most iconic structures in the world. It was built in just 400 days, held together 74,000 bolts. Today, it stands as a symbol of the Pacific Northwest, reminding us of plans of the past and dreams of the future.

The idea for the Space Needle was first sketched on a napkin by Seattle hotel executive Edward “Eddie” Carlson during a visit to Germany in 1959. He was thinking of the upcoming 1962 World’s Fair for which he was chairman. A Space-Age tower could be a symbol of a great fair, as well as a centerpiece of the Seattle skyline for years to come. He organized the private “Pentagram Corporation” to build the Space Needle, with financier Bagley Wright and Ned Skinner, contractor Howard S. Wright, architect John Graham, and timber magnate Norton Clapp.

John Grahm would be responsible for the design, and Howard Wright’s Construction Company would serve as the general contractor.

The proposed Space Needle had no pre-selected site. Since it was not financed by the city, land had to be purchased within the fairgrounds. The investors had been unable to find suitable land and the search for a site was nearly dead when, in 1961, they discovered a plot, 120 by 120 ft, containing switching equipment for the fire and police alarm systems. The land sold for $75,000, with only one year remaining before the World’s Fair commenced.

Graham began working on the design. Carlson’s sketch was more of a giant balloon tethered to the ground but Grahm envisioned a flying saucer-like halo that would house a rotating restaurant and observation deck at the top. He had built a revolving bar in Hawaii and adapted that technology to the Needle, designing the first free-standing rotating restaurant in the world.

The Space Needle would need to withstand wind speeds of 200 mph, double the requirements in the building code of 1962, and would only be allowed to sway one inch per 10 miles per hour of wind speed. It would also need to withstand earthquakes, which was ensured when ground broke on the structure. A hole was dug 30 ft deep and 120 ft across. It took 467 concrete trucks one full day to fill it.

With time short, Wright’s construction team would need to work around the clock. The foundation weighs 5850 tons, the same as the above-ground structure, which is bolted to the foundation with 72 bolts, each one 30 ft long. The domed top, housing the top five levels, needed to be perfectly balanced so that the restaurant could rotate with the help of one tiny electric motor.

The construction team met their deadline, and the Space Needle was finished in April 1962, at a cost of $4.5 million. It was painted in custom colors named Orbital Olive, Astronaut White, Re-entry Red, and Galaxy Gold. The last elevator car was installed the day before the Fair opened on April 21. Upon completion, the Space Needle was the tallest building in the western United States, replacing the Smith Tower in downtown Seattle as the tallest building west of the Mississippi since 1914.

During the course of the Fair, nearly 20,000 people a day rode the elevators to the Observation Deck. The 20,000 mark was never reached, having only missed by fewer than 50 people one day. Some of those visitors were leaders, artists, and celebrities, including The Shah and Empress of Iran, King Olaf of Norway, Prince Philip, Richard Nixon, Lyndon Johnson, Bobby Kennedy, Walter Cronkite, John Wayne, Walt Disney, John Glenn, and many more. Elvis Presley made a movie during the fair that featured a love scene in the restaurant. It was also featured that summer in the first live trans-Atlantic TV broadcast, which reached 200 million viewers. The Space Needle was a hit.

In 1966, a young Bill Gates won a dinner at the Needle from his church for memorizing the Bible’s “Sermon on the Mount.” The Bill and Melinda Gates Foundation is now located right across the street.

Over the years, the Space Needle has been used to celebrate all sorts of events, especially sports, as it’s often donned with the colors of a team in the playoffs. In 2013 during Super Bowl XLVIII, the Space Needle shot off fireworks after every Seattle Seahawks touchdown. It got to the point where the pyrotechnic team had to ration them so that there would be enough for the end of the game as the Seahawks won 43–8.

In Grahm’s original designs, the observation windows were much larger than what was finally built. Building construction was limited to what the technology of the day would allow. In the last couple of years, the Space Needle has undergone a major renovation, using modern structural glass technology to help deliver on Grahm’s vision while providing a new exciting experience for guests.

The Century Project is it’s formal name, but the staff at the Needle calls the project a “space lift.” Construction wrapped just over a year ago.

New glass barriers, which tilt outward to match the angle of the building, replaced the wire “caging” on the outer observation deck, offering seamless sightlines.

Sleek, canted glass benches are affixed to alternating glass barriers, leaving guests with feet dangling, leaning out over the city below for a spine-tingling Seattle selfie.

Floor-to-ceiling glass replaced the low-level interior walls on the observation deck, creating an uninhibited view from the moment you step off the elevator.

In the interior, a dramatic new open circular stairway made of steel, wood, and glass – winds down from the observation deck to the 500-foot level. At the base, there is a glass-floored oculus revealing views of the Space Needle’s steel superstructure, as well as the elevators and counterweights ascending and descending.

The 500-foot level also features floor-to-ceiling glass and the world’s first and only revolving glass floor called the Loupe. You can walk out on it if you dare, and take in tremendous views of the tower and city below.

10 different types and more than 176 tons of glass have been used in the renovation, mostly installed frameless for clean sightlines. Each section was custom-designed with multiple redundant layers of structural glass fused together with a high-strength interlayer, giving the glass composite a strength capacity up to five times the design loads used for code requirements. The Loupe weighs 37 tons and has a total of 10 layers of structural glass. The very top layer of the glass floor is a “scuff” layer that is made to keep the glass clean from shoe marks. This layer will be replaced on a regular schedule for visual clarity and can be easily replaced if damage occurs without compromising the floor’s structural integrity.

To maintain flawless views, the Space Needle employs a full-time glass keeper team that cleans and maintains the more than 20,000 square feet of glass throughout the day. In order to keep rain from interfering with the view, the glass keepers coat three to four panels each week with a repellent that helps water to bead up and roll off of the glass.

The Space Needle is open 365 days a year and is a part of the Seattle Center public complex, a 74-acre civic, arts, and family gathering place that is home to more than 30 cultural, educational, sports and entertainment organizations attracting over 12 million visitors each year. The nation’s first full-scale commercial monorail system, Seattle Center Monorail, provides a quick and convenient link between downtown Seattle and the Space Needle.

The revolving restaurant at the Needle is no longer open, but the organization is working on developing a new world-class dining experience, and guests can still snack at the cafe and wine bar.

Jason Epperson is the co-host of the See America Podcast and Co-Founder of the RV Miles Network, a network of resources for the U.S. based traveler. Jason, along with his partner Abigail Trabue, travel the country full-time with their three boys discovering great road trip destinations and exploring our National Parks.

Links to some of the resources we used in this episode.