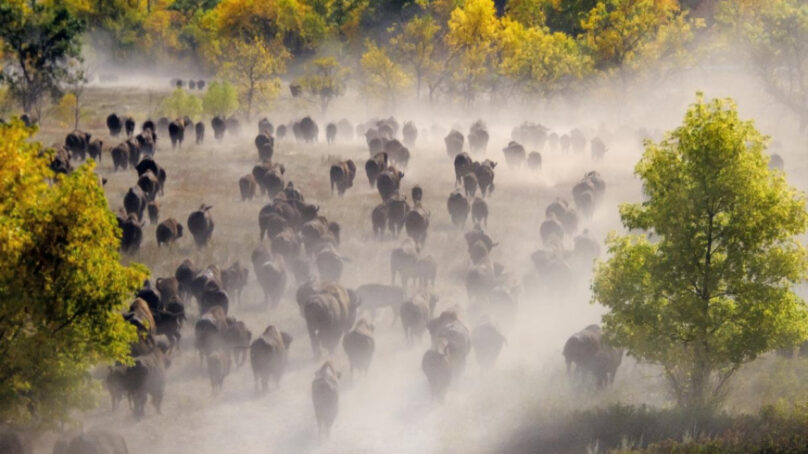 Probably the most iconic American mammal is the bison, or buffalo as it’s colloquially called. When I began traveling, one of the first things on my mind was road tripping west to see these magnificent creatures in the wild. They’re nearly synonymous with Yellowstone National Park, but there’s another, and in my opinion a much better place to see them. One where traffic jams rarely occur every time a Bison meanders by. It’s also a bit easier for most Americans to get to and every bit as beautiful: the Black Hills of South Dakota.

It might be hard to imagine, but the great plains were once home to 30 to 60 million Bison, from as far east as the Appalachian Mountains to the Rockies in the west. The herds were so large that the bison became a symbol to Europeans of the seemingly endless resources of the continent. The Lakota and other tribes lived symbiotically with the bison. They regarded the Tatonka, as they called it, as sacred and without them, they might not have survived. They used all the parts of the animal and let nothing go to waste. The bison served as their main source of food, shelter, and clothing, and were a key part of ceremonial and spiritual events.

The Lakota, like the buffalo, were nomads and they followed the herds.

The connection that the Lakota and other Native Americans had with the bison was nearly destroyed in the 1800s, when the creatures were almost entirely eliminated, with less than 1,000 individuals left at the lowest point. A 1905 account showed 835 wild bison and 256 in captivity. Historically, the bison’s most essential predator were wolves, who regularly followed the large herds, culling the old, incapacitated, and very young animals. But as the new nation moved west, they were hunted until they were almost gone. And mostly just to mount their beautiful heads, and not for sustenance.

Well past the time it was too late, game laws and nature preserves were established to help the surviving bison to live and multiply. Today their numbers have rebounded to about 350,000 – only about 1% of their original numbers, but enough so that the bison are no longer in danger of extinction. About 15,000 reside on public lands in the US, the rest are private herds held by non-profits, or on ranches, such as Ted Turner’s herd of 51,000, the largest in the world.

South Dakota plays host to more bison today than any other state. There are plenty of places to witness their statuesque majesty—especially in the stunning Black Hills.

At 71,000 acres, Custer State Park makes up one of the largest nature preserves in the Black Hills to visit bison. Senator Peter Norbeck, the Father of Custer State Park, recognized the dire situation the bison were in and decided to take action to preserve the beast. In 1914, the park, then known as Custer State Forest and Game Sanctuary, purchased 36 bison to start its herd. By the 1940s, the herd had swelled to over 2,500, but the bison soon began to overgraze the park’s rangeland. Adult bison consume more than 30 pounds of grass in a day.

There was also a health crisis. The contagious brucellosis disease was sweeping through the herd, which humans can contract. It’s a painful reproductive disease that can lead to miscarriages or required abortions for the cattle.

A process was put in place to reduce the number of animals to a manageable quantity for the park, and to perform a health check. Each fall, Cowboys on horseback began to roundup the herd. They started administering vaccinations for brucellosis and tuberculosis, as well as de-worming the animals of any internal parasites. Gore wounds were treated with antibiotics and anti-inflammatory pain medication.

The size and the structure of the herd were then adjusted according to the predicted availability of grassland forage. The excess bison were sold at auction, and the herd would replenish during the spring birthing season.

Today, the park boasts just over 1300 Bison, who, on a Friday in late September, are herded up for the health check and auction. It’s become a public tradition to witness the grand ceremony as cowboys on horseback run the entire heard over a bluff into a valley where a giant pen awaits. 50 years in, the event is now called the Buffalo Roundup and Arts Festival. It’s the culmination for spectators following a month’s worth of work by ranchers in the park, when workers chase the buffalo into a 1-mile by 8-mile pasture.

Standing at about 6.5 feet at the shoulder and weighing up to 2,000 pounds, the bison is the largest land mammal in North America, yet it can jump 6 feet vertically and run at 35 miles per hour. That power is on full display as the herd barrels from the pasture through the valley at the roundup, with the calves struggling to keep up, as spectators watch 60 riders chase the herd into a couple acre pen from the hillsides on the north and south of the valley.

You feel the ground rumble and see the dust fly as one of the last great traditions of the Old West unfolds before your very eyes.

As the heath check-up begins, the public can come see some of the animals up close. Over the course of the weekend, about 300 bison are auctioned off to build new herds at farms and other preserves across North America.

The same weekend as the roundup is a coinciding arts festival at the parks Game Lodge, where native and western dancers and musicians perform, cowboys spin tales, and artists show their made-in-South-Dakota wares. There’s a dutch oven cooking competition, raptor demonstration, and plenty of Buffalo Round-up merch.

Early crowds for the roundup were around 200 people, but when the film Dances With Wolves came out in 1990, interest in the west exploded, and the crowds began to swell. The event now attracts more than 14,000 people each year.

If you go, plan ahead. The area is relatively remote. There are no facilities, other than port-a-potties that are brought in for the event. Large motorhomes and trailers aren’t permitted, though small campervans should be OK. The north and south parking areas open at 6:30 am and close at 9 am. The buffalo usually run through at about 9:30. You’ll want to get there early to get a parking spot and good seating. Bring your own lawn chairs, and be prepared for any weather, and especially for mud. If you drive in from the north, you’ll be in the north parking area, and likewise with the south. You can’t switch. Each side is about the same, but there seem to be more people on the south side, as that’s where all the tour buses go. No reservations can be made, but the views are pretty good from everywhere on site.

There’s a pancake breakfast for a small fee, or you can tailgate at your car. After the bison are in the pen, there’s a barbecue lunch served, or you can head over to the arts festival, or any of the parks lodge restaurants.

Custer State Park is located about an hour south of I-90 at Rapid City and it’s home to over a dozen lodges and campgrounds, and plenty of cabins for you to stay at. Whether you visit during the Buffalo Round-up or any time of the year, you’ll have a great time. The park offers fantastic hiking trails, and three of the best scenic drives in America. The wildlife loop road showcases bison, elk, pronghorn, whitetail and mule deer, coyotes, burros, prairie dogs, eagles, hawks, and a variety of other birds rarely found together in one location. A medley of colorful wildflowers and prairie grasses surround the road, making for a picturesque drive. Deemed “impossible” to construct by its critics, Needles Highway was completed in 1922. It’s an impressive 14-mile stretch that includes sharp turns, narrow tunnels, granite spires and world-class views.

Needles Eye Tunnel, just 8’ 4” wide, is one of three tunnels found on the route. It’s name comes from the remarkable granite spire located near the tunnel entrance. Looking similar to the eye of a sewing needle, the sleek opening was created by rain – and wind – freezing and thawing over time. Obviously, your vehicle needs to fit through it and the other two tunnels to take the road. Spectacular sites to see along the way include Legion Lake, Center Lake, the Cathedral Spires, and Sylvan Lake.

Also a miracle of engineering, the Iron Mountain Road boasts pigtail bridges, magnificent Black Hills scenery, and tunnels that frame Mount Rushmore perfectly for your first views of the monument. Once you reach the top of Iron mountain, a sweeping view of the entire Black Hills area will leave you breathless, with Rushmore looming in the distance. You can continue down the other side of the mountain, which ends up very close to the monument’s parking lot.

Both Iron Mountain Road and the Needles Highway are closed during the snowy season – mid-fall to mid-spring.

Enjoying See America? We’d love a 5-star review on Apple Podcasts, and don’t forget to check out the entire line-up of the RV Miles network of podcasts, including the National Park focused America’s National Parks and the RV and travel focused RV Miles.