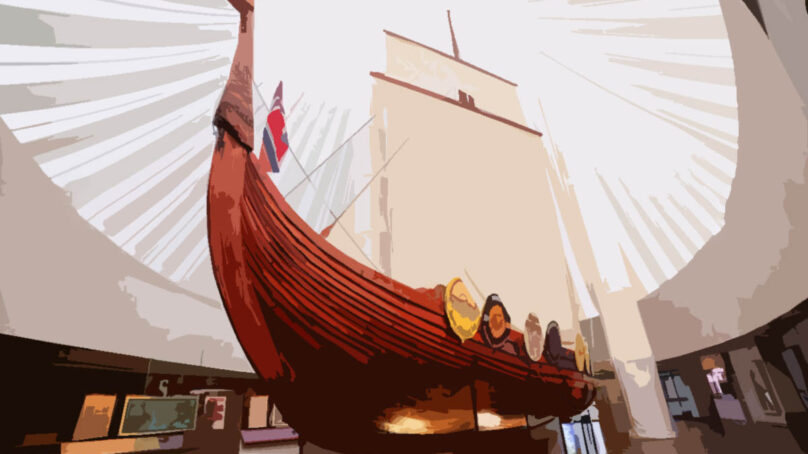 Introduction to the Hjemkomst:

In the summer of 1971, a Minnesota Junior High School guidance counselor took a severe fall from a friend’s roof. While recovering from his injuries, he set out to build a dream. A replica of the ship from his ancestral Viking heritage. One that would sail him all the way to Norway..

This week on the podcast, the Hjemkomst, the Viking ship that inspired a community.

Moorhead, Minnesota. Home of the Dilly Bar, about a dozen pro hockey players, and some of the flattest and most fertile farmland in America.

It’s landlocked, to be sure, but the ancestors of Moorhead’s people were anything but. After the Northern Pacific Railroad reached Clay County in 1871, the next several decades brought a wave of Nordic and German homesteaders who brought their own stories and traditions, often drawing from the history, folklore, and myths of the Vikings.

The raider kings and bands of the Norse people, the Vikings ruled the Northern European seas from the 8th through the 11th centuries. They traveled and traded far, touching down in Canada and exchanging goods from as far east as Iraq. At the foundation of their influence and reign was the longboat – a vessel adapted for both sailing the high seas and navigating shallow rivers, thanks to the hull’s flexibility, the presence of both sails and oars, and a shallow draft. With these ships, the Vikings left their mark on a wide swath of the globe.

In 1971, Robert Asp decided to celebrate his culture and return to the sea. The Moorhead Junior High School guidance counselor had shared his dreams of building a Viking ship with his brother Bjarne for years, but his plan went into action after a severe fall from a friend’s roof that summer. While recovering from his injuries, Bob studied his Norwegian heritage and found the story of a 9th-century burial ship that had been unearthed from a mound in Norway in 1880. Bob would build a Viking ship modeled after it, named the Hjemkomst, and he would dream of sailing it to Norway.

History of the Hjemkomst:

After a year of planning, Bob Asp was ready to begin work on his Viking ship. He searched the far and wide for the flexible white oak required in shipbuilding and finally found it on a farm near East Grand Forks. Lumber was also donated by family members, friends, and local communities. Bob initially estimated that it would take 15 oak trees to build a Viking ship. It ultimately required over 100 trees.

The first lumber was milled at a sawmill north of Viking, Minnesota, on July 4, 1972. Most of the lumber was 1″-2″ thick and approximately 8″ wide. A total of 11,000 feet of lumber was sawn, sorted, piled, and left to dry for two years. Hot paraffin wax was brushed on the ends to help prevent twisting and bending.

Asps’ backyard was too small to construct a Viking ship, but he heard that the Leslie Welter Potato Warehouse in Hawley, Minnesota, was empty. After some phone calls and lobbying, the Hawley City Council purchased the building and leased it to Bob and Rose Asp for $10 a year to construct the ship. Renovations during January and February 1974 transformed the Welter Potato Warehouse into the Hawley Shipyard. The first floor was removed from the building and the Hjemkomst was built on the basement floor, six feet below street level.

The Hjemkomst construction progressed slowly for the first several years. Asp could work on the ship only on weekends and during the summer. Although he was diagnosed with leukemia in 1974, Bob continued his work with the help of friends and family. As the ship took shape, some voiced skepticism about the project, and others volunteered their time and effort. The Hjemkomst would take six more years to complete.

Removing the completed Hjemkomst from the shipyard building was a difficult task, but on July 10, 1980, the front wall of the Hawley Shipyard was torn down so the ship could continue on the next leg of its journey. Care was given to support the roof and sidewalls of the building to ensure the whole structure would not collapse. The sidewalk and old bricks were pushed in and loads of gravel were added to create a ramp.

On July 17, 1980, the ship made her entrance into the sunlight to greet the public. With a tow truck and winch, it was inched out supported by bridge timbers and rolling on steel pipes. Once the ship made it to the street, a crane picked it up and turned it so the moving process could be completed. Hannah Foldoe, Bob Asp’s mother-in-law, and a Norwegian immigrant was given the honor of christening the Hjemkomst on July 20, 1980. “Hjemkomst” means “homecoming” in Norwegian. The christening ceremony was part of the three-day “Viking Ship Days” celebration held in Hawley, where $35,000 was raised for the Hjemkomst‘s voyage.

The Hjemkomst left Hawley for Duluth, Minnesota on August 5, 1980, at 9 PM. Because of the special permits needed for transporting an overweight and over-sized ship, it had to be moved at night. Bob’s nephews, Alvin and Kenny Asp of Asp Brothers Trucking, drove it, and a highway escort was provided by state troopers.

Many doubted that the Hjemkomst would float before the ship was launched in Duluth. Bob Asp had always said that it would, but he could not guarantee it would float right side up. The Port Authority of Duluth donated the use of its 90-ton twin gantry cranes to put the Hjemkomst in the water as more than 4000 spectators watched along.

The Hjemkomst took her maiden voyage, under her own power, in the Duluth Harbor on August 9, 1980.

Throughout the end of that summer, Bob sailed his ship throughout Lake Superior. He took his last trip on September 27, and would never make the trip to Norway. He died on December 27, 1980.

Bob Asp’s family was committed to keeping his dream of sailing the Hjemkomst across the Atlantic alive. In March of 1981, the Hjemkomst was displayed at the Minneapolis Institute of Arts along with the famous Viking Exposition. This move and public display was the next step in continuing the project and the long road of fundraising to complete the dream voyage of the Hjemkomst.

As supporters raised funds, a crew was assembled and training began on Lake Superior. Unfortunately, these efforts proved to be difficult as Duluth harbor was notably calm. Additionally, the Hjemkomst’s square rigging proved difficult to control. The crew needed someone with experience with similar vessels to train them for the voyage. It turned out the man for the job lived in Norway, where square-rigged sailing tradition has lived for centuries. Erik Rudstrom, who had sailed similar ships from Norway to Iceland four times agreed to help improve the ship’s performance. Eight more tons of ballast were added to improve stability, the rudder was redesigned, an extension was added to the keel, and a larger mast and sail were made for the vessel.

A crew of thirteen set out from Duluth in May of 1982. It included professional sailors, a long-distance truck driver, college students, and four of Robert Asp’s children.

Lake Superior was the coldest and most difficult part of the voyage, but the Hjemkomst and her crew sailed Lake Huron in near record-setting time. Throughout the American leg of the journey, the crew was honored at several receptions and celebrations.

They were forced to row the Hjemkomst through part of the Erie Canal, just as their Viking ancestors would have along coasts and through rivers and fjords. The Hjemkomst arrived in New York City on June 8, 1982. The voyage around the Statue of Liberty, a symbol of freedom and hope throughout the world, brought national attention once again.

The ship left New York, now a 12-person crew, and prepared for a fierce tropical storm that loomed ahead.

Five hundred miles out of New York the storm hit and the crew worked dauntlessly to ensure both their own safety and that of the Hjemkomst. A 1/8″ crack that ran 14′ threatened their success. Crew members stuffed burlap sacks into it to slow the leaking. Although only 500 miles from New York, Rudstrom decided the Hjemkomst should continue its voyage to Norway. To turn back meant the ship would sail against the wind, perhaps causing more damage, and would take the same amount of time. Several more gales were encountered, but nothing compared to their first and only significant storm.

During the following weeks on the North Atlantic, the crew entertained themselves by writing in their journals, relaxing and reflecting, filling the silence with music, and watching and swimming with dolphins. Several noted their awe upon seeing whales and sailing several evenings through bioluminescent plankton. However, many had difficulty articulating their sense of triumph upon first seeing Norway after their weeks on the high sea. The crew had prepared for months, and for some years, for this moment.

The crew of 12 was greeted by their families and honored with a hero’s welcome by the people of Bergen, Norway, on July 19, 1982. All around the coast of Norway the Hjemkomst and her crew were honored in celebration, including a royal visit with the King of Norway on his yacht in the Oslo Fjord. On August 9, 1982, the Hjemkomst reached Oslo, her final destination, just as Robert Asp dreamed of eleven years prior.

The Hjemkomst was stored in Oslo for a year after the voyage. Then it was towed, shipped, towed again, then transported by truck back to Moorhead, where it was donated to the city to put on display at the newly constructed Hjemkomst Center. It sits proudly in a large climate-controlled room constricted for it, where you can walk around it and go up on a balcony to look down into it.

The Hjemkomst Center is Clay County’s history museum, and anytime you visit you can encounter an art show or some other display of the county’s heritage. Outside the main building is a replica nordic Stave Church, constructed in much the same way as Asp’s ship — with love, determination, and out of rough-hewn lumber.

The museum is open nearly every day, from 9-5, and noon to 5 on Sundays.